I’ve had Candace Owens muted on Twitter since 2017. I’ve never been a fan of her, but I pride myself on being the kind of person that can put my biases aside and process information objectively.

I was planning on writing about her feud with Kim Klacik, but after watching 40 out of her 44 minute Instagram live expose (an incredible feat for me as someone who hates listening to people — especially politicos — talk for extended periods of time), I realized it would have to be an entirely different piece than the one I was intending on writing.

What Candace laid out on Instagram was shocking, and seemed well researched. If you didn’t watch it, I’ll save you 44 minutes of your life that you can’t get back. Long story short, Candace looked into claims Kim made about a charity organization, her campaign spending, cocaine, and stripping.

She said that she had multiple large expenses ($75,000+) to sketchy, defunct companies for activities that shouldn’t cost anywhere near that much basically accusing her of money laundering. She claimed that Kim was a stripper at her ex-husband’s club, recruited other women to strip, and that she had spent campaign contributions on coke.

I hope none of this is true, and I don’t think Candace is motivated by anything but her ego, but no matter who the messenger is, these claims deserve real attention and scrutiny. If they’re true, it’s pitiful and embarrassing that the only reason this is coming to light is over a twitter spat.

If Candace’s allegations turn out to be true, I’m grateful she brought them to light.

The allegations of fraud are the real story here, and I’m not trying to distract from that. But Candace said things in that video that I can’t ignore.

When Candace first gained traction, it was over a video she made about Charlottesville that went viral. I actually liked that video, and was looking forward to hearing more from her. That video got her Fox slot after Fox slot, tens of thousands of followers, and almost overnight she went from nobody to somebody. That wasn’t my issue. My issue was how inconsistent her messaging became as soon as she gained traction. She went from politically neutral to a Trump stumping self proclaimed conservative within a week. As someone who made an ideological 180°, I have a hard time believing anyone made that transformation in 5-7 business days.

She didn’t vote for him in 2016. She was calling him a cheeto or some other cringe liberal shit around that time. In the hundreds of interviews I’m sure she’s done since 2017, maybe she finally took ownership for the doxxing platform she created (with a $75,000 kickstarter goal), but when I watched what I could get through of her debate with Blaire White on Dave Rubin’s show back in 2018 (I think) all she did was shout over Blaire call them a man when asked about it.

It cracks me up when conservatives act like she sacrificed so much for the movement when the movement literally made her. As she was rising to fame in 2017 she was squatting in a $3,500/month luxury apartment refusing to pay rent over a “mold issue” that was causing “health problems.” But if she was suffering the way she claims she was, why not break her lease and move out? No judgment, but she was a bum, and conservatism was her come up.

She followed the pattern of so many people that find their 15 minutes of fame, and chased controversy and shock value like a bloodhound. And obviously, it worked for her — and honestly, I’ll give credit where it’s due. Her 15 minutes never ended, and she’s not going anywhere any time soon.

When it comes down to it, I think Candace is completely void of substance. Just look at her Naomi Osaka tweets less than a day apart. She’ll say and do just about anything for attention. 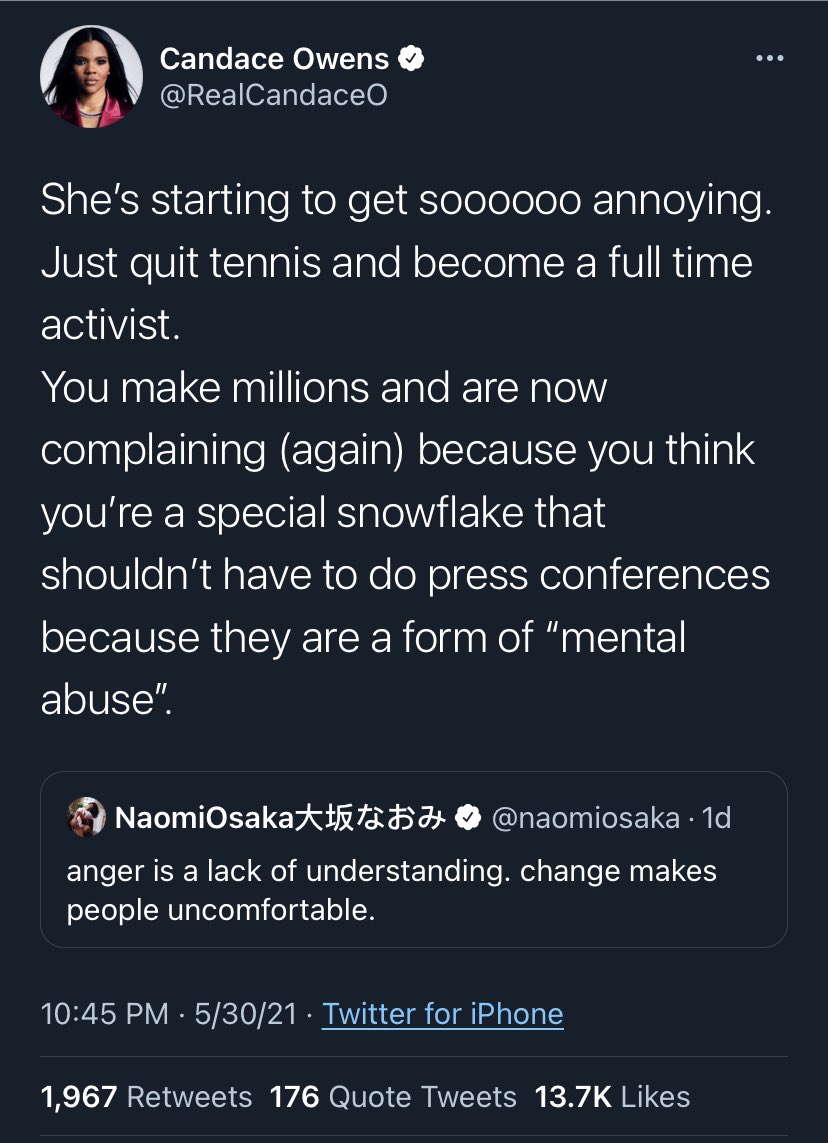 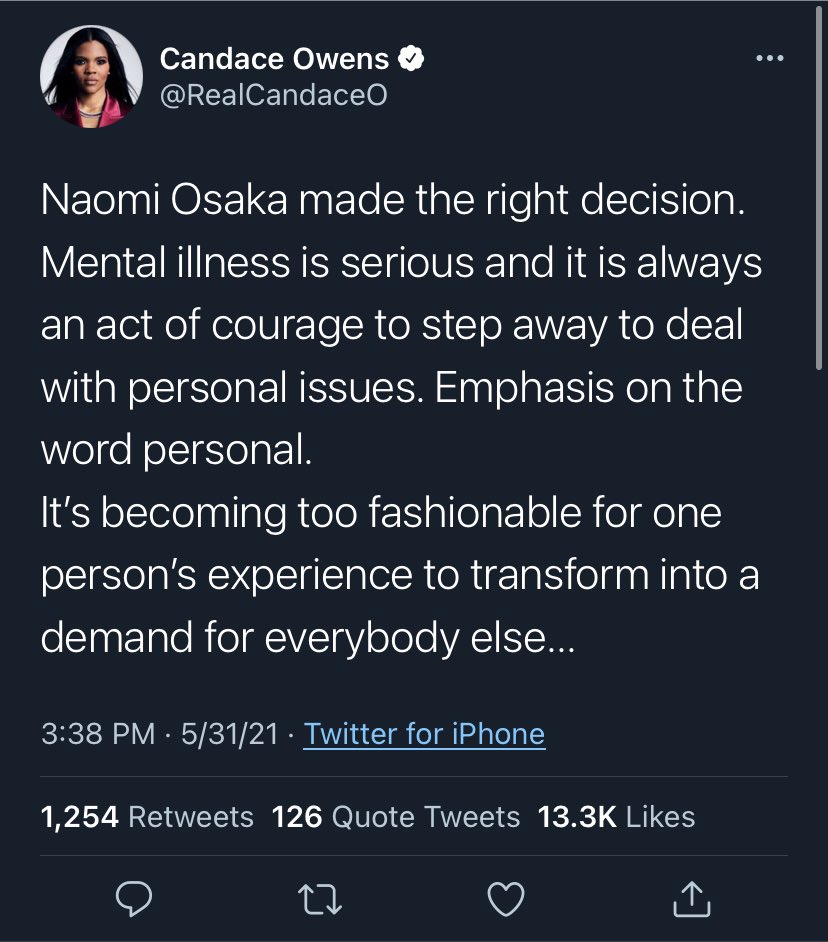 I literally had to look these up and verify them myself, because even for her it seemed ridiculous. But she’s also an extremely talented speaker who has actually done some positive things for the Republican Party. And when I come across her opinions, I don’t always disagree with them. She makes good points relatively frequently. In 2016, Charlie Kirk basically pitched me on filling her position before they found her, but I was working undercover at Project Veritas at the time, so I had to turn it down, and I can say I NEVER could have accomplished what she did. I’m not confrontational enough, charismatic enough, a good enough public speaker or quick enough on my feet.

For years I’ve ignored her, and come to accept both the negatives and positives that come with her. So why bring this up now? In her 44 minute Instagram live, she had an awful lot to say about grifting black “conservatives” popping up out of nowhere that make being black the focal point of their identities, and I found it ironic coming from her. Because while she’s been extremely successful and established herself as a leader on the political right, and her views may have very well evolved over the last 4 years, I didn’t forget where she came from or how she came to be. And as disappointed as I am in the allegations that have come out against Kim, what I loved about her was that her platform wasn’t “I’m black and I voted for Trump, support me!!!” she actually had interesting ideas.

When Candace was first rising to prominence, being a “black conservative” was pretty much her entire shtick. She started out calling herself “Red Pill Black.” She claimed to reject identity politics while literally building her career on them. I haven’t collected screenshots or videos of everything she said over the years, but you don’t need to be a detective to figure out what I’m talking about if it’s not fresh in your memory. A 2018 Twitter search should suffice.

This all started because Kim took issue with Candace’s tweet about black America.

Honestly, I think it was a DM conversation, not a TL conversation. But I don’t think Kim’s original assessment was entirely off base. I don’t think that because Candace is black, she’s obligated to think or speak a certain way about “black issues” (whatever those are supposed to be), but I think that as someone who built their brand on being a Black Conservative™, she alienates more black people than she engages with.

Like I said, I’ve had her muted on Twitter since 2017. Maybe she’s addressed everything I mentioned, and I’ve just been living under a rock. But with the information I have, this is what I thought needed to be said. I couldn’t ignore Candace’s hypocrisy even in the face of Kim’s alleged crime spree.

« Thinking You’re Oppressed Isn’t A Substitute for A Personality