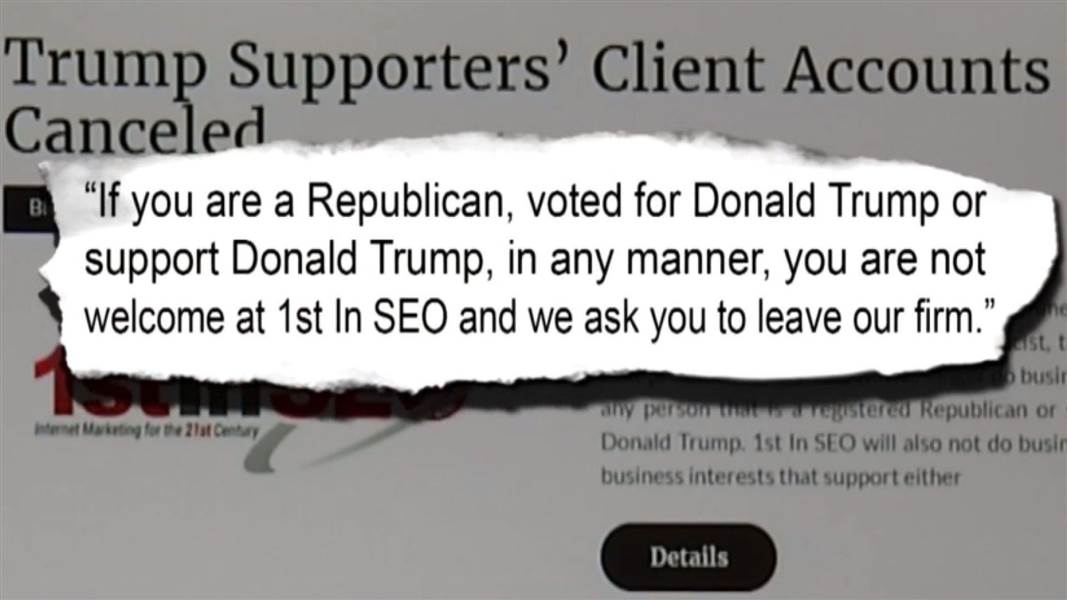 I’ve been on the job hunt for about a month and a half, and being that I’m impatient and overconfident, it naturally feels like it’s been a year and a half. There could be a thousand reasons that someone wouldn’t want to hire me, and this could all be conjecture. But I can’t help but wonder how much my conservative background has affected my abysmal luck on the job hunt. Political discrimination isn’t something we talk about a lot. I may not be a straight white male but the fact that I “think like one” has affected me in more than one way.

For example, I was recently rejected from a job that I really wanted, and that I honestly thought I had a good shot at. For once, there wasn’t a minimum of a decade of experience or virgin sacrifice required for a position. I was qualified. I made it through several rounds of screening, but was ultimately rejected. Maybe the other candidates were just better than me. Maybe my nerves got the best of me in the second part of the in-person interview. And maybe, just maybe, politics had something to do with it.

I’m not trying to insinuate that the only possible reason I could ever be denied a position is because of my partisan professional past, at all. I actually researched the hiring manager, and found that she was extremely liberal and politically invested. Maybe she decided to put differences aside and give me a fair chance; maybe she didn’t really get a good look at my resume before contacting me. We’ll never know. But you’d be a fool to pretend that in cities like New York and Boston, a resume covered in “Ted Cruz” is doing me any favors.

I’d like to say first and foremost that I’m proud of everything I’ve done and I support a private entity’s right to discriminate as it sees fit. I think the free market is a more efficient instigator of real progress than the government ever could be. What do I mean by that? Let consumers, not Uncle Sam, have the last word. But I think there are very real consequences of political discrimination, especially in the “Trump era” that should be recognized and discussed.

Many on the left struggle recognizing Trump supporters as people, let alone victims of anything. We’re all selfish, stupid hillbilly bigots while simultaneously being uber-rich villainous one percenters, fueled only by our hatred of equality and love of Russia. Or something like that. So why should they care if we face political discrimination? If anything, we probably deserve it.

But reality tells a very different story than the caricature that’s become narrative. The people that voted for Trump were mothers, wives, daughters, and aunts. They were fathers, husbands, sons, and uncles. They were immigrants. They were musicians. They were chefs. They were artists. They were your neighbors, friends, babysitters and dog walkers. And when half of the people that share this country demonize the other half to the point that they fear for their livelihood, we’re no closer to solutions.

This has ramifications far outside of the professional world. Remember that story about people looking for roommates with “no Trump supporter” stipulations? When I first read it, I thought that was a little ridiculous, but to an extent, I understood where the woman in question was coming from. The two months before I got fired, I was basically living with two coworkers of mine that were also Trump supporters. I had bought a pack of Marlborough gold cigarettes for a project for work, and one roommate joked that I should have gotten a pack of Newports. And we all laughed because it was funny. I don’t think it matters whether the people I live with share my views on immigration or the economy, but I care about being able to joke, laugh, and relax when I get home. That’s hard to do with people that are offended by white chefs making burritos.

When I thought I would be moving to Brooklyn, I interviewed with these two girls near Bed-Stuy. They were both creatives that worked in Manhattan. From the way the apartment was decorated and the way they were dressed, I knew they weren’t “my people” in a superficial sense. One of them had a short purple bob and the other had a buzzcut, but that didn’t matter to me. They were nice. We shared interests. Conversation flowed naturally, which isn’t always easy showing up to a stranger’s house and trying to decide whether or not you want to live with them.

They were interviewing other people, and ended up offering me the room. They really liked me. I still had one more room to view, but a day or two after the offer they rescinded the invitation upon discovering that I was a Trump supporter, presumably after stalking me on social media. 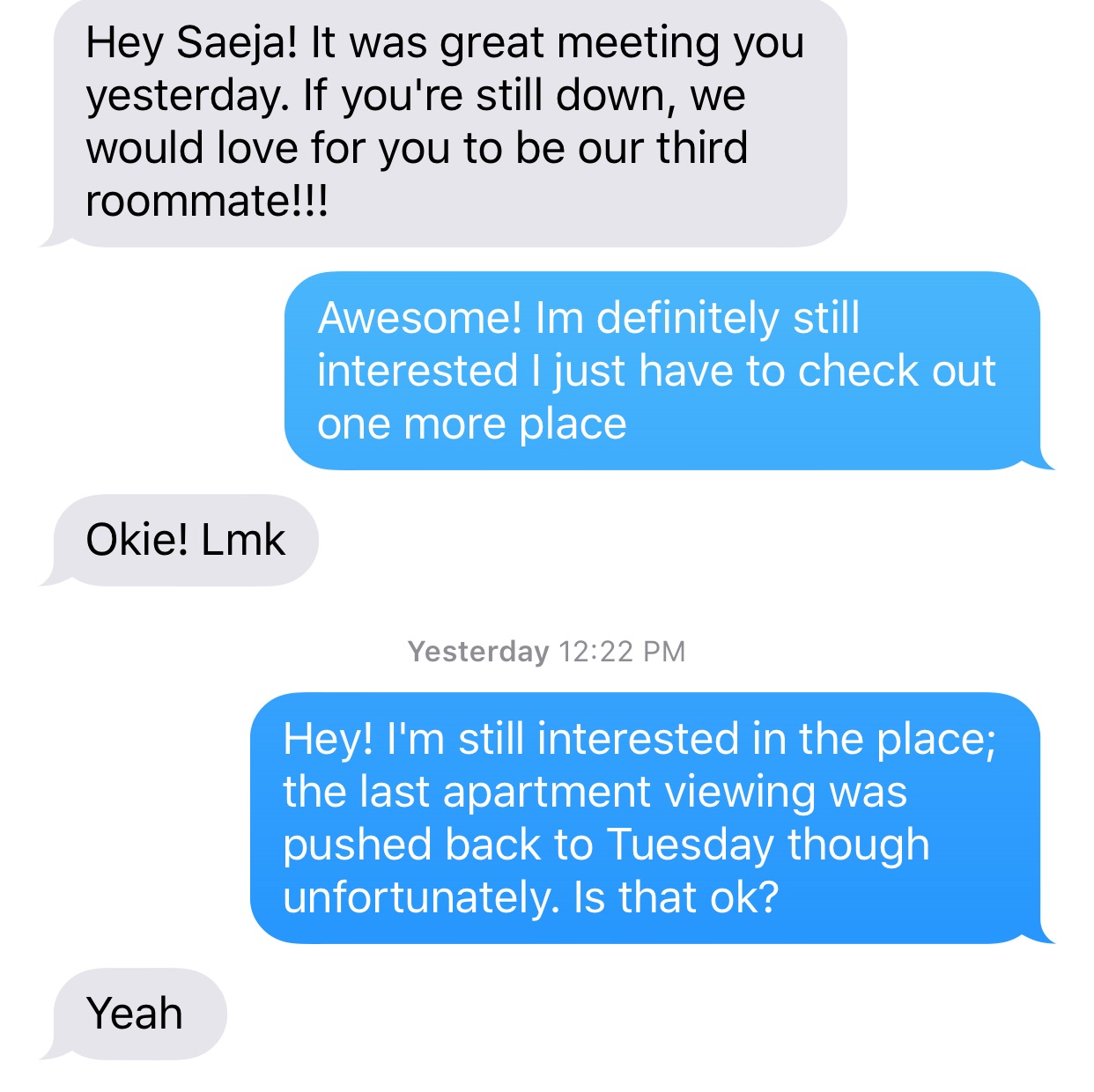 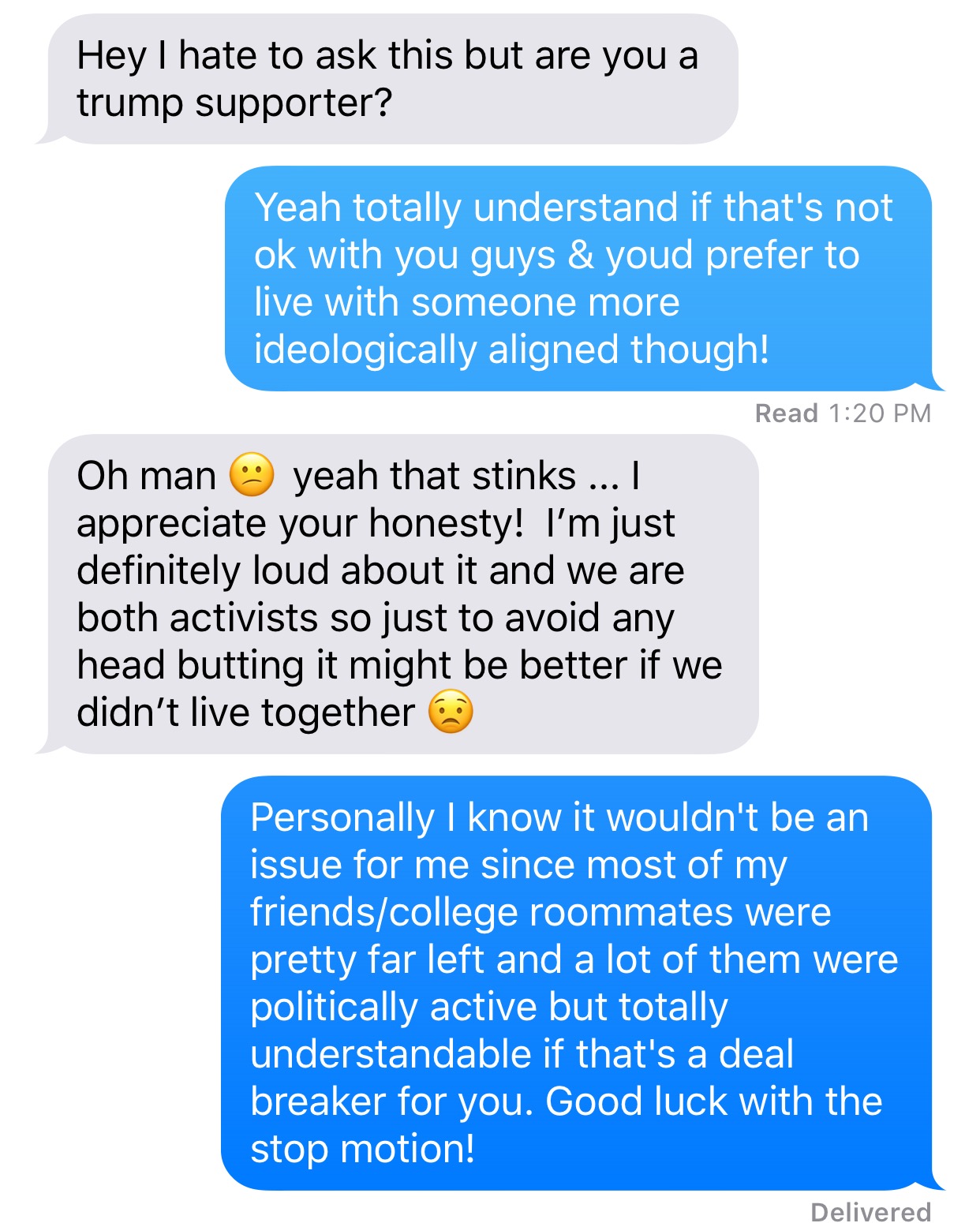 Last year, some former friends from high school reached out, wanting to reconnect. One of my former best friends had no interest in doing so because of my political beliefs.

The reunion wasn’t my idea and I didn’t care either way, and I found a better room in Park Slope that I was planning on taking anyway, but that’s not the point. I have had conversations with people who’s best friends of 10 and 15 years stopped talking to them because they voted for Trump. I’ve talked to Silicon Valley employees literally petrified of their employers or coworkers learning they support Trump. Is political discrimination acceptable just because the people it affects people that you assume you don’t like?

If people are afraid they’ll lose friends, jobs, and opportunities over their political opinions, how can they ever be honest? How can you ever truly know who you share this country with? How do you know the people you love aren’t the people you think you hate?

Many on the left argue that if you have a bad opinion, you should be afraid to share it. A popular liberal rebuttal to “Make America Great Again” was “Make Racists Afraid Again.” To an extent, they have a point. If I believed that on the third day God created the Remington bolt action rifle so that man could fight the dinosaurs and the homosexuals, I’d probably be embarrassed to admit it. But when everyone that disagrees with you is labeled a nazi by default, regardless of their actual belief system, the argument holds no weight.

Political discrimination stands in the way of productive discussion. Liberals were stunned on November 8th. And the longer they silence and dismiss everyone that voted for Trump, the longer this surprise party will last.