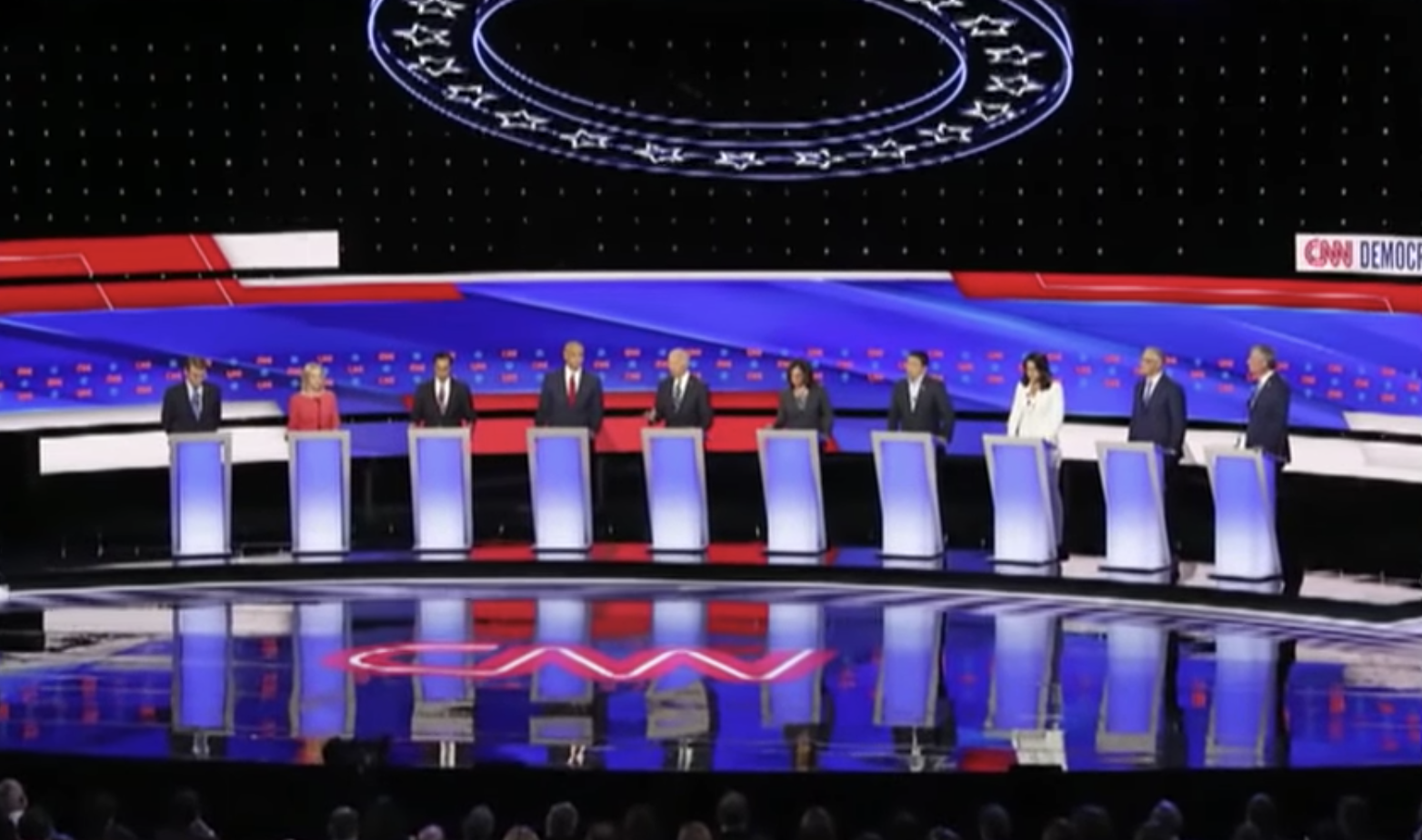 I work in political fundraising. I constantly see (and use) rhetoric about how far left the democrats have moved, and the threat they pose to our country. And of course I believe it, but I think the longer you work in politics — especially in the DC area, the less sensitive you become to politics as a whole. I watch politicians say absurd things every single day. When it comes down to it, most of it is all for show. Elected officials will say damn near anything for 15 seconds of public approval without the slightest intentions of seeing their promises through. C’est la vie. Welcome to Washington.

So watching big political events usually doesn’t have much of an effect on me. I watch hearings and debates and press briefings for two reasons: my job and entertainment value. I’m not actually affected by a couple of hours of grandstanding and posturing. Sure, I’ll roll my eyes or let out a sigh, but in the grand scheme of things, does it actually matter? Doubtful.

But watching last night’s democratic debate, I was actually floored. Pardon my French but what the actual fuck is happening anymore?

Since undergoing my political transformation as a rising college sophomore from Obama loving hipster to Cruz supporting conservative, I’ve heard the same lines a thousand times about republicans being evil sadists that hate the poor and feast on human flesh. I’ve been involved too long to be phased by it. And as a Trump supporter, I’m not exactly shocked by the LITERALLY HITLER, ORANGE MAN BAD song and dance.

But for literally 3 hours, I watched people that wanted to lead the United States of America pull half baked policy out of thin air, literally lie about their records and adopt the talking points of 15 year old Tumblr users.

Don’t get me wrong — I remember 2016. I remember what a circus the debates were — and that was largely thanks to Trump. He offered lots of entertainment, name calling and distraction and no substance. It drove me crazy talking to voters that said they “liked how he talked” completely blind to the fact that he wasn’t saying much of anything, no matter how funny or ballsy he was.

But to watch the leading candidates on stage offer nothing but deflection, bullshit and literal communism for 3 hours straight was actually maddening.

I watched 10 candidates — most of them elected officials that had taken oaths of office in some capacity to represent the American people — COMPLETELY abandon the interests and values of the people they supposedly wanted to represent.

But almost every single vaguely middle of the road or sane sentence uttered was met by immediate condemnation by everyone else on stage. When Biden said that immigrants need to come legally, he was attacked. When Bennett noted that these single payer healthcare proposals that either fully eliminate or drastically reduce private options would turn off a lot of voters he was accused of using “republican talking points.” Kamala said she’d fine companies that weren’t paying women equally without any explanation on how that would be quantified. Is their work history taken into account? Education? Accomplishments in their positions?

The second round of the democratic debates was one of the most disheartening things I’ve watched since I got involved in politics, not as a Republican, but as an American.

Ignoring the fact that despite “far right” tough talk on immigration, Trump is actually pretty moderate within the scope of right of center politics, he was the outlier in his “fringe” views among GOP presidential hopefuls. Ahead of 2020, a rule of law is basically the Fourth Reich and private insurance is an unspeakable evil.

Like I said, politicians are full of shit, and I’d be surprised if any of these lunatics stood a chance against Trump in 2020. Even if they could, I’m sure they’d abandon half of their platforms once in office and inspire a red wave midterm election.

In primaries, you tend to see candidates fight to prove they’re the farthest left or right in the field to pander to their respective bases and beat out their opponents, and then dial everything back in the general election. But the fact that Democrats have to pretend to be Karl Marx himself to secure the nomination is more than alarming. Does anyone know if the Sweet Meteor of Death is making a play this time around?