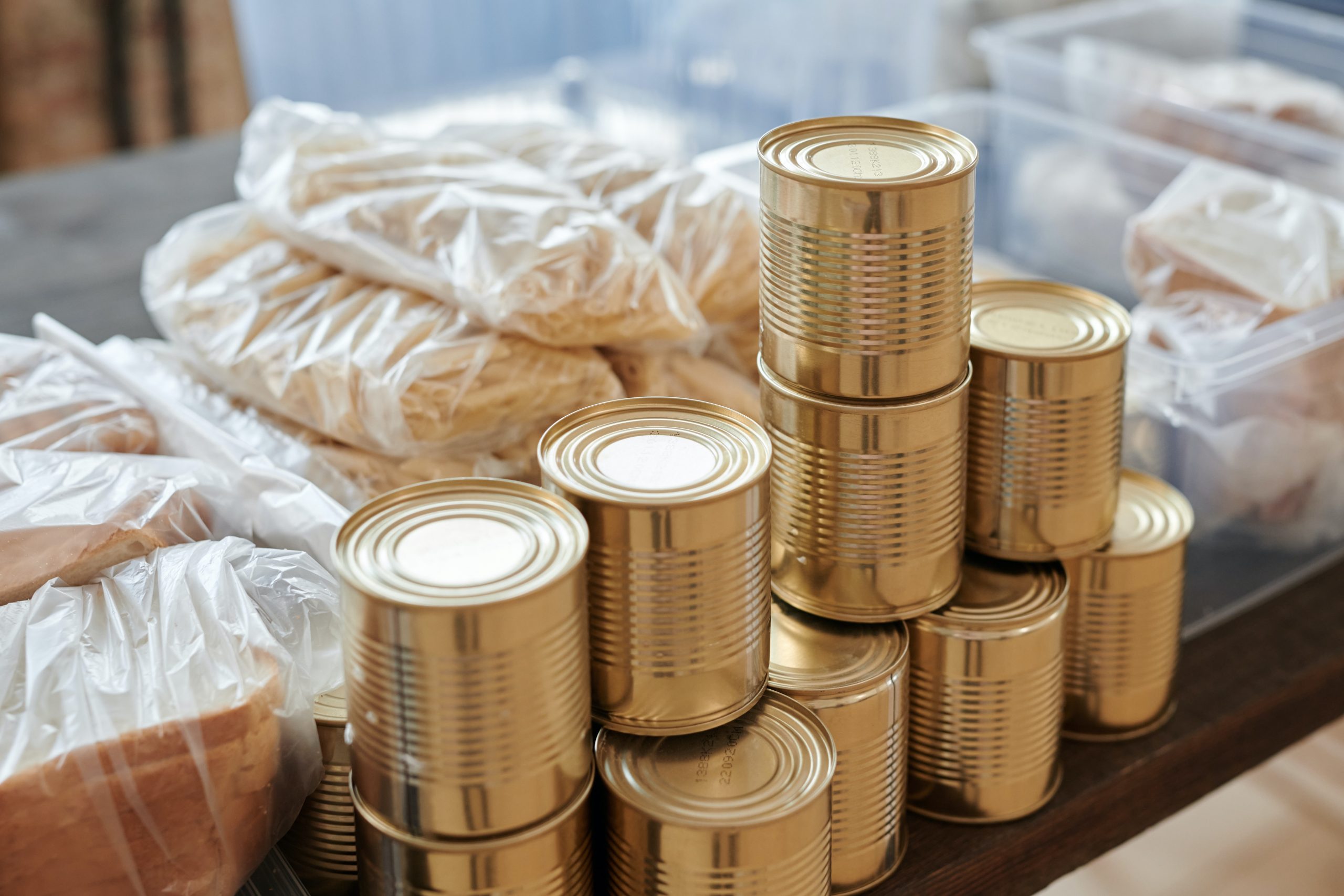 It’s been about four months since I’ve published anything on my blog. Something happened in February, and I’ve been extremely depressed since. I’ve smiled and laughed many times since then and know I will smile and laugh many more times, but I don’t know if I’ll ever be genuinely happy again. I’ve drafted quite a few blog posts about it, but I don’t know if I’m ever going to publish any of them.

Now that that’s out of the way, “prepping” isn’t something I ever really thought about until 2020 – and that was really stocking up on frozen food at the beginning of COVID because I didn’t know if there’d come a time that we couldn’t go to grocery stores.

It wasn’t until 2021 that I started thinking about prepping in any real capacity.

As someone that’s always lived a comfortable life, a huge part of me just says if things ever get so bad that I need to live off of an emergency food supply for more than a week or two, just put me out of my misery. I ate canned tuna (with nothing added) a few weeks ago because I heard it was good for fighting off sickness and I knew I was coming down with something. I remember thinking “if this becomes my life I think I’d rather die.” But none of us know how hard we’ll actually fight to survive until we have to, so we’re better off safe than sorry.

You’ll find that a lot of “preppers” come from families of preppers, or at least have a dad that’s a prepper. For them, it’s second nature at this point.

Talking to someone that’s grown up with a preparedness mindset can be overwhelming if you’re like me. They know so much and can make you feel like you’re so far behind.

No one in my family preps, and I don’t know if they ever have. My mom knows how to plant and garden, but that’s about it. I’ve lived a very blessed life, in a financially stable household in a region generally immune to devastating, life-threatening natural disasters. My mom might make sure to grocery shop before a big blizzard, but that was about it.

Like, if you’re able to look at the shortages we’ve been having, our dramatically declining standard of living, and the skyrocketing rates of basic goods and tell me everything is fine (or even worse, that everything is Russia’s fault) I’m afraid of you. That kind of willful delusion would be impressive if it weren’t so dangerous.

Since 2021, I’ve tried to slowly but surely become more prepared for whatever’s to come, and as someone that’s still very new to this, I feel like I may be able to break down some basics in a relatively digestible way for other people like me, that grew up clueless about the world of prepping.

This is by no means an exhaustive list, but I do think it is a decent place to start.

I’m going to start with what I’ve already done and then transition to the things I still have to do.

So, you know how we’re running low on Diesel and genocidal maniacs that run this country refuse to drill domestically? If Diesel-powered big trucks stop running, within four weeks you’re looking at complete societal collapse including our clean water supply running out. If you watch Naked & Afraid, you understand the importance of drinkable water. The human body can survive without food for much longer than it can survive without clean water. If society collapses, your $30 Brita from Target is not going to save you. You need to invest in a heavy duty water filtration system like a Berkey or an Alexa Pure that you can trust to remove the vast majority of toxins in water.

2. Stocking up on meat

I don’t care what the vegans or Bill Gates tells you, meat keeps the human body strong and gives us nutrients that plants (or bugs) will never be able to replace. When they started warning of meat shortages, I immediately began stocking up. Every time I’d go to the grocery store, I’d buy an extra pack of ground beef. Ideally, you want a deep freezer just for meat, but if you’re like me and still living in an apartment, just do what you can with your regular freezer. Something saved for later is better than nothing.

3. Stocking up on canned goods/slow-to-perish foods

I would hope this is self explanatory enough. We’re already facing major food shortages, and it looks like the problem is only going to get worse (not because it has to be, but once again the people in charge of this country are genocidal maniacs). If for some reason you’re without power for an extended period of time, and your stove, oven and/or refrigerator are rendered useless, you want food that you can eat with little to no preparation. These foods are generally slower to perish than other foods, so they’re ideal for long term storage. Every time you go to the grocery store, grab some extra items that you can keep in your emergency supply.

I don’t know if you saw the COVID footage from Australia, but it was insane. I literally saw a video of a cop beating a civilian with a baton until he was bloody for sitting on the grass outside without a mask. And this wasn’t some situation where the guy on the grass actually hit first but the video cut it out. I saw the interaction from start to finish, and there was plenty where that came from. Governments only pull that shit on unarmed populations – and that’s exactly why they’re pushing so hard for gun control now. Whether you’re protecting yourself from power drunk politicians or protecting yourself from some convict a liberal DA let out of jail on parole, you need to be able to defend yourself, and there is no better way to do that than with a gun.

You don’t just need firearms – you need the things that make them effective. During and after COVID, the price of ammo shot way up because the factories that make them were shut down. Stock up when you can afford to.

What I still need to work on

If someone breaks into your home in the middle of the night, you don’t want to be fumbling around like an idiot, pointing at the wrong place, or trying to shoot with the safety on. If you’re in a situation where you feel like you need to point a gun at someone, seconds will probably decide whether you live or die, and you want to be able to operate swiftly and with precision.

7. Work on your relationship with God

I know not everyone is religious, and I put this in the “what I still need to work on” portion of my list because even though I have been actively working on my relationship with God, following what happened in February, my faith has admittedly wavered, and it’s been difficult for me to rebuild it. But I don’t think the list would be complete without this.

8. Invest in a generator

This is especially difficult for those of us still in apartments, but finding a high quality generator that can power your important appliances is crucial – especially for when you may find yourself exposed to extreme elements like a winter in Michigan or a summer in Florida.

The closer you can get any product from the source, the better, and if you can become a regular customer and establish a relationship, you may find that if/when meat “runs out” at the grocery store you’re still able to get it.

11. Producing your own food (chickens, gardening)

The less dependent you are on others to feed yourself, the better shape you’re in in an emergency, and while storing food is great, it’s only going to take you so far.

12. Investing in a canner/learning how to can

Like I said, eating canned tuna made me want to die. If you can learn how to can food for yourself, you can prepare and preserve actually delicious and nutritious meals that you can store at room temperature for years.

A satellite phone is great for emergencies because it depends on satellites instead of cell towers so no matter what’s going on you find yourself able to communicate and share crucial information with your loved ones. Like many items on this list, a satellite phone is a steep investment, but like all of these items, it’s something you’re better off having but not needing as opposed to needing and not having.

Again, this list isn’t comprehensive, and I don’t think anyone can be prepared for everything. I’m still nowhere close to where I’d like to be in terms of my own preparedness, but I’m lightyears ahead of where I was this time last year. Unless you have a casual half a million sitting in a trust fund somewhere, this stuff takes time. But there’s no better time to start than now.

« Why You Should & Shouldn’t Love Jesus, Marry Young & Have Lots of Babies