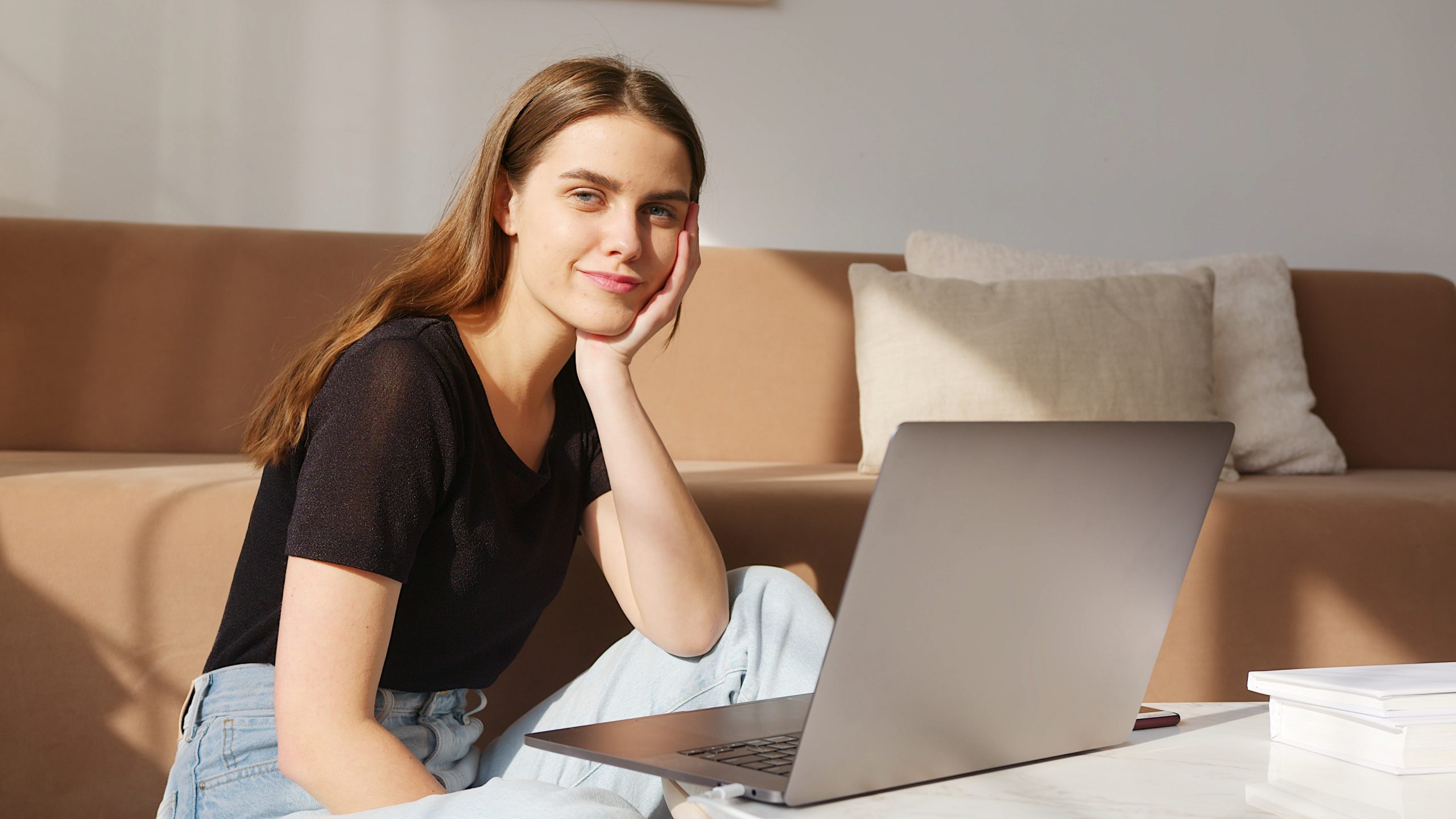 My last blog post was on September 30th and a lot has changed since then. Usually, I feel bad about going a full month without posting, but I couldn’t even write last month when I tried to. I’m lucky to have a political job that’s secure no matter who’s president, but between the election and a promotion at work, I was the most burnt out I’d been in quite some time. I tried to start blog posts and just couldn’t get farther than a paragraph or 2. And of course it didn’t help that I was trying to figure out my living situation.

At the beginning of October, I was looking for a roommate to fill the last room in my apartment. There was one girl I showed the place to that seemed great, but her moving timeline changed. There was another girl I showed the place to that I didn’t particularly like, but by then I had reached a point where I didn’t really care who took the room as long as they seemed relatively normal and well-mannered. I just wanted to get it over with so I could stop worrying about it.

But the end of my lease was getting closer and closer, and filling the last room in my apartment started to feel less and less realistic. It felt like a lot less people were moving than normal. I saw a lot more posts about vacant apartments than people looking to fill them.

I started weighing my options. The rent at my last apartment was $2650 total and we split it between 3 people. My share was $875 — an unheard of price for my location because we had a 2 bed + sunroom and used the sunroom as a third bedroom. If I couldn’t find a third roommate, my rent would have gone to at least $1325, and I didn’t want to pay that much to share an apartment with someone.

I briefly thought about moving into one of the townhouses I’d seen posted where I’d have a comparable rent. But then I thought more about it.

I can live with pretty much anyone, and I can get along with pretty much anyone. And of course the pandemic and all the time at home was somewhat of an incentive, and the idea of being able to fill up my water in the middle of the night without a deranged cat clawing at my feet was pretty enticing. Both of my roommates spent weeks at a time at their parents’ homes, and while they were gone I realized that I wouldn’t feel lonely living alone. But the real reason I was starting to seriously consider living by myself was because I didn’t want to live with liberals anymore.

As hundreds of misinformed teenagers from failing school districts spammed my comments, I posted this on my story.

Then my roommate sent me this. 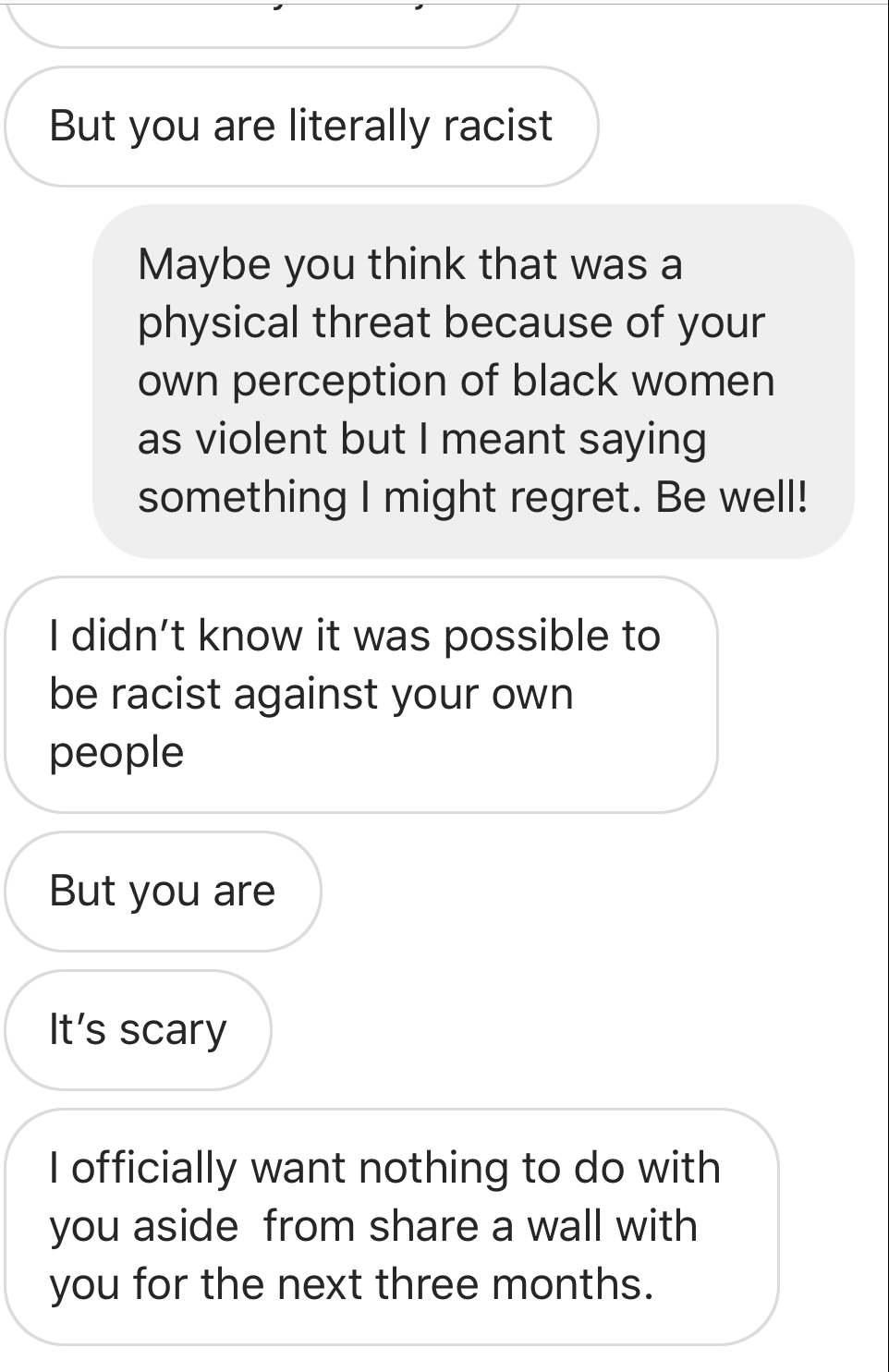 We’re fine now, and even though she pissed me off with this, at the end of the day I think she’s a good person. But this wasn’t the first time I’d had issues with a roommate over politics.

My first apartment was a townhouse I shared with 3 other girls and one of them was super liberal. She could be cordial and make small talk, but the other roommates made it very clear that she didn’t like me because of my politics.

The thing that got me was I NEVER brought up politics in conversation. It’s honestly the last thing I’m going to start talking about in my free time. But I posted things liberals didn’t like on Instagram. And how long would it be before my new roommates added me on Instagram and decided what I posted on my social media was a problem?

It might sound like I’m being dramatic, but I’d literally had an apartment offer rescinded in New York once they realized I was a Trump supporter. I’m speaking from experience. 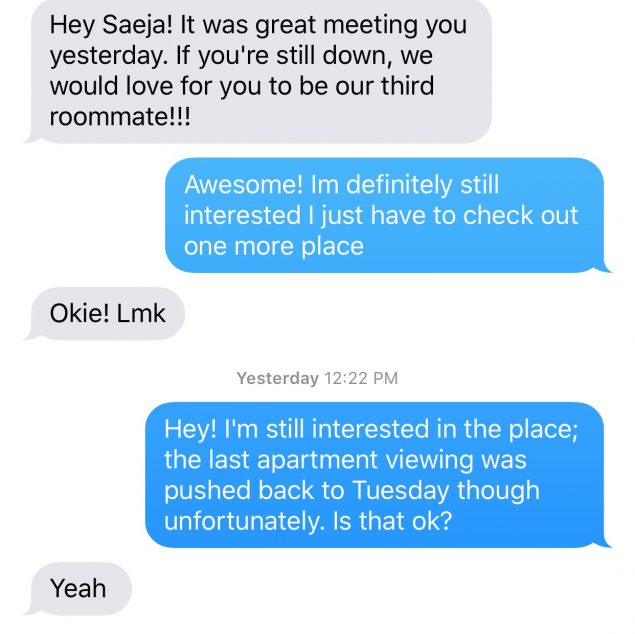 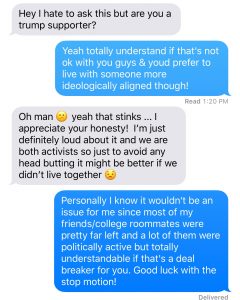 Sorry not sorry, but I’m never, ever going to censor myself to coddle the 7 liberals that follow me, roommates or not. I follow dozens of liberals, and manage to scroll and tap past things I disagree with without batting an eye. On rare occasions, I’ve slid in DMs for respectful discussion. But I’m done with liberals and progressives acting like their virgin eyes and ears are too delicate for exposure to different ideas. I’m not going to say sorry for joking about liberals being illiterates or pussies when I see 5 stories a day accusing me of being a racist fascist rape enabler.

I never thought I would live alone. I love nice things, but I’m cheap. I never thought I’d live alone because I didn’t want to waste the money. I thought I’d live with roommates until I got engaged and then split rent with that dude for a few years before we moved to Texas or Florida to raise our lacrosse team of children. But that peace of mind, knowing that I could come home to a true sanctuary that was mine and mine alone was well worth the extra money.

I know the idea of living alone can be intimidating and stressful — especially in a place as expensive as DC. I never want to be the kind of person that was in a luxury apartment building with $68 left to their name after they paid their bills, or where one impromptu Target trip could make or break me for the month. Living within (and honestly below) my means is important to me. I thought the only way I’d be able to live alone without financial anxiety would be if I moved into a depressing shit hole apartment where families of 7 share a 2 bedroom or take a bus somewhere. But there are ways to make it work and live somewhere that makes you happy, surrounded by young hot people, even if you don’t spring for all the bells and whistles.

It’s been 2 weeks since I moved into my tiny studio apartment, and so far I love it. I couldn’t be happier with my decision, and this experience has reminded me just how many blessings can be on the other side of stressful situations.

« My Major Takeaway from the First Presidential Debate

Everything I Saw at the Million MAGA March Trump Protest »