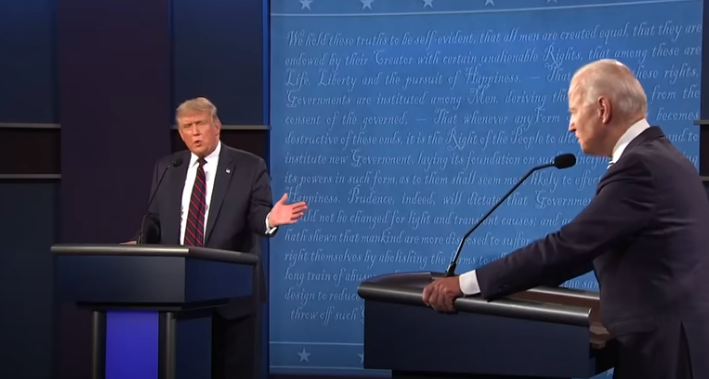 Last night the highly anticipated first presidential debate between Trump and Biden took place, and even if you didn’t personally watch it I’m sure by now you’ve heard what a disaster it was.

If I’m being completely honest, I don’t think there was a winner. Trump was not on his A game, and I don’t think an A game exists for Biden at this point. Not going on a demential tangent is considered a good day for him. The only entity that benefitted from those 2 hours was CNN for actually getting people to watch their network.

I thought it would take more than one question to devolve the debate into complete madness. But after Christopher Wallace asked the first question on the Supreme Court, the debate quickly went downhill and…just kept going.

Speaking objectively, I think this debate was a tremendous waste of an opportunity for both candidates. There are so many people that have no idea what they’re doing between now and November, and both President Trump and Vice President Biden had a lot to gain by making their cases before the American people and addressing voters’ hesitations and misconceptions. But instead they argued in circles for 2 hours, interrupting one another and squandering their allotted speaking slots — and the moderator left a lot to be desired for both Democrats and Republicans.

There was one major takeaway I came from the first debate with, and it’s that coronavirus is the only real ammunition the Democrats have against Trump.

None of Biden’s other attacks stuck. He had no other leverage. Like I said, I don’t think Trump was on his A game and didn’t do the best job of highlighting his accomplishments and debunking the defamatory and blatantly false claims made about him on a daily basis. In my opinion, many of his attacks on Biden fell flat — not because they lacked substance or truth, but because of his delivery. But it became clear to me about half way through the debate that coronavirus was the cane holding up Biden’s tired, feeble, ready-to-collapse campaign.

I mean, it’s been obvious to any honest person paying attention that the President’s enemies have taken advantage of coronavirus for their own political purposes — but now it’s obvious they’ve reached the internal conclusion that coronavirus is the sole advantage they have going into the election. It’s the only way they can win in November.

Focusing on coronavirus and blaming Trump for everything that went wrong is their one and only shot at the White House.

I’m sure there are things President Trump should have and could have done differently, but overall I think the people committed to hating him have completely mischaracterized his coronavirus response, and that too many people have accepted those mischaracterizations at face value without bothering to do any of their own serious research.

The people most critical of Trump’s coronavirus response say he didn’t do enough in the beginning, and that he knowingly put American lives at risk and consequently infected millions and was responsible for hundreds of thousands of deaths. They lambast him like we can’t find actual footage from February and March of high ranking Democrat leadership downplaying the virus, likening any federally mandated lockdowns to tyranny, and calling the early travel bans he instituted “racist” and xenophobic.”

If Trump wants to keep the White House, he and his campaign are going to have to do a much better job of articulating the facts to the American people and cutting through the Democrat narrative — and they can’t afford to wait until another debate to do that.