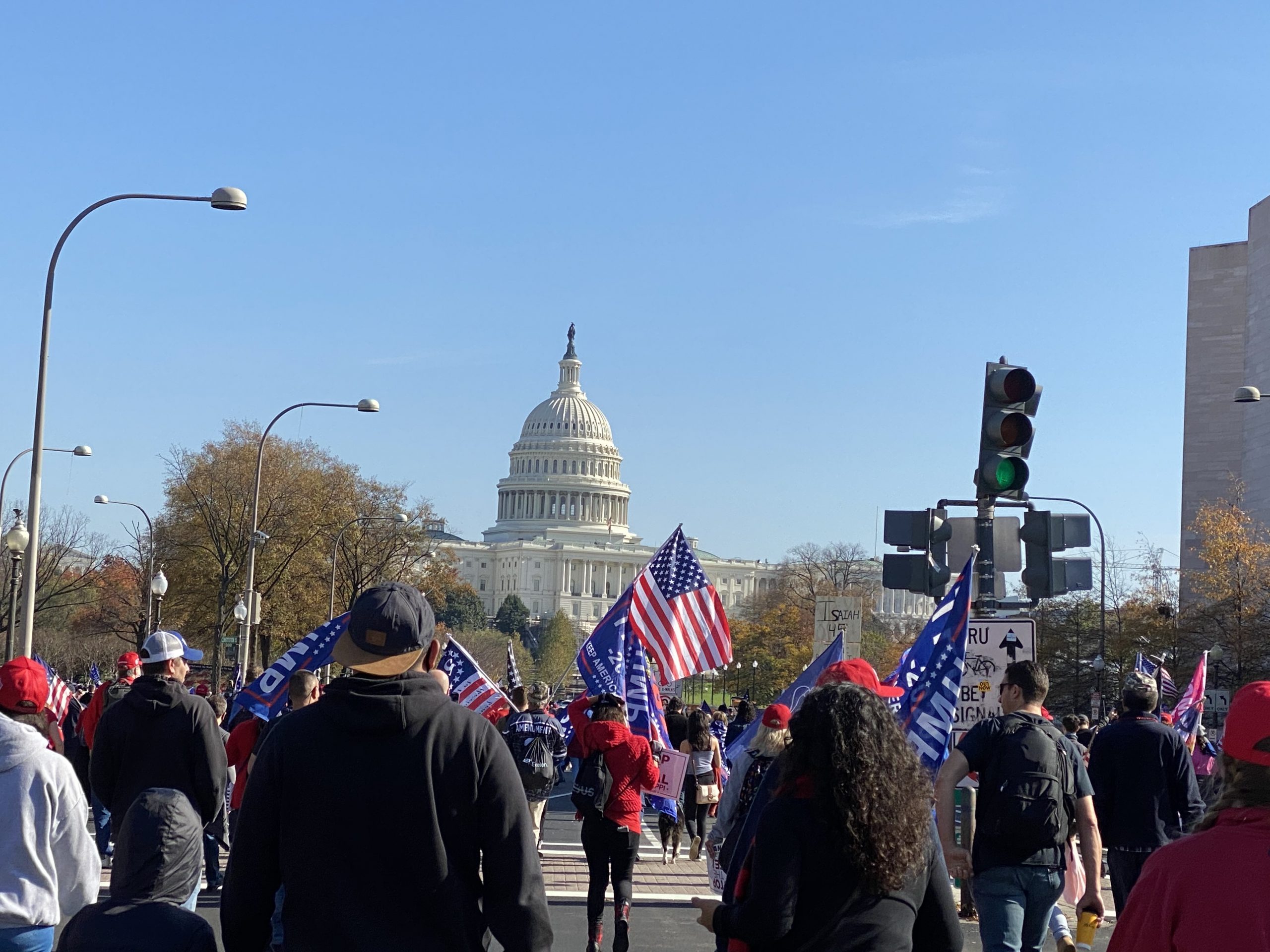 I’m really not a protest person. It was my least favorite thing to do when I was an undercover journalist — especially because in those situations, I was usually undercover with Antifa and BLM types, so I had to dress like shit and pretend to be a moron. I’d much rather send a donation somewhere or do actual volunteer work than chant or hold a sign.

I went for drinks with another conservative girl in Clarendon the night before the Trump protest, and we’d briefly discussed the idea of going but neither of us had fully committed. The next morning I texted her that I was leaning towards going but she had been called in for work.

I had never witnessed a protest for my side, and I was curious. I wanted to see it for myself, not through Twitter or Instagram. And I felt like I had a chance to witness history. So I did something completely off brand, and went to a political protest unironically. 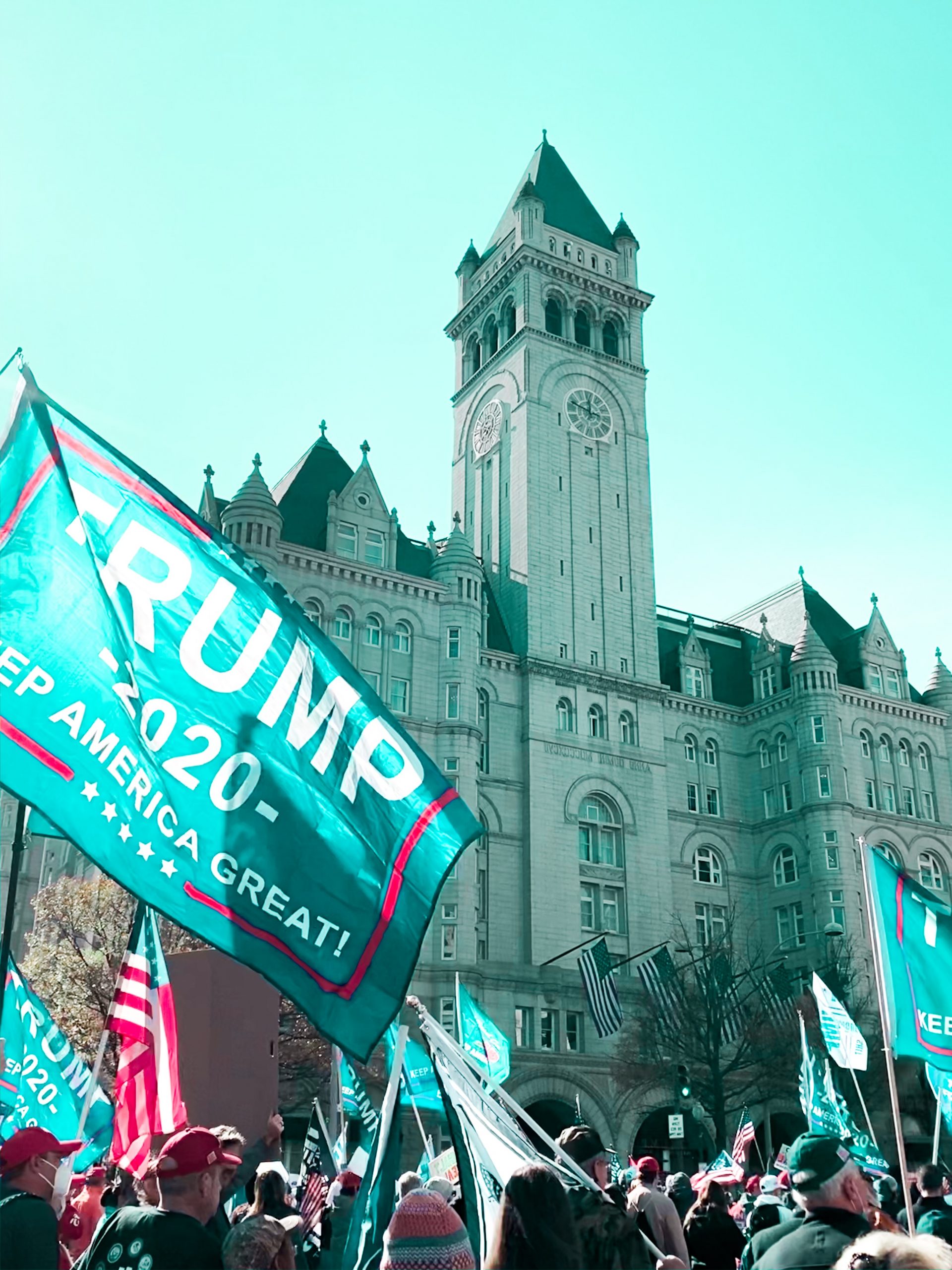 I didn’t really know what to expect. Blue checks on Twitter were making it sound like a complete flop with few attendees. But as soon as I stepped onto the metro, I knew that was fake news.

There were MAGA hats as far as the eye could see on the train, and more people than I’d seen on the train since the pandemic started at any time of day on any day of the week. And before anyone starts talking about “super spreaders” I’d remind them of what DC looked like at the same time last week when the media rushed their call for Biden.

As soon as I got outside, the energy was palpable. I’m horrible with eyeballing numbers but there were already hundreds (if not thousands) of people in Freedom Plaza, and all of them were there to support Trump. I climbed on top of an elevated surface to get a better look at the crowd, but couldn’t get a picture that quite did it justice. I stayed up there for a few minutes and started making my way towards where I thought the speaker was. I didn’t know who she was and couldn’t really hear what she was saying.

A girl who had also come alone recognized me from Instagram and we immediately became protest pals. We walked from Freedom Plaza to the Supreme Court. 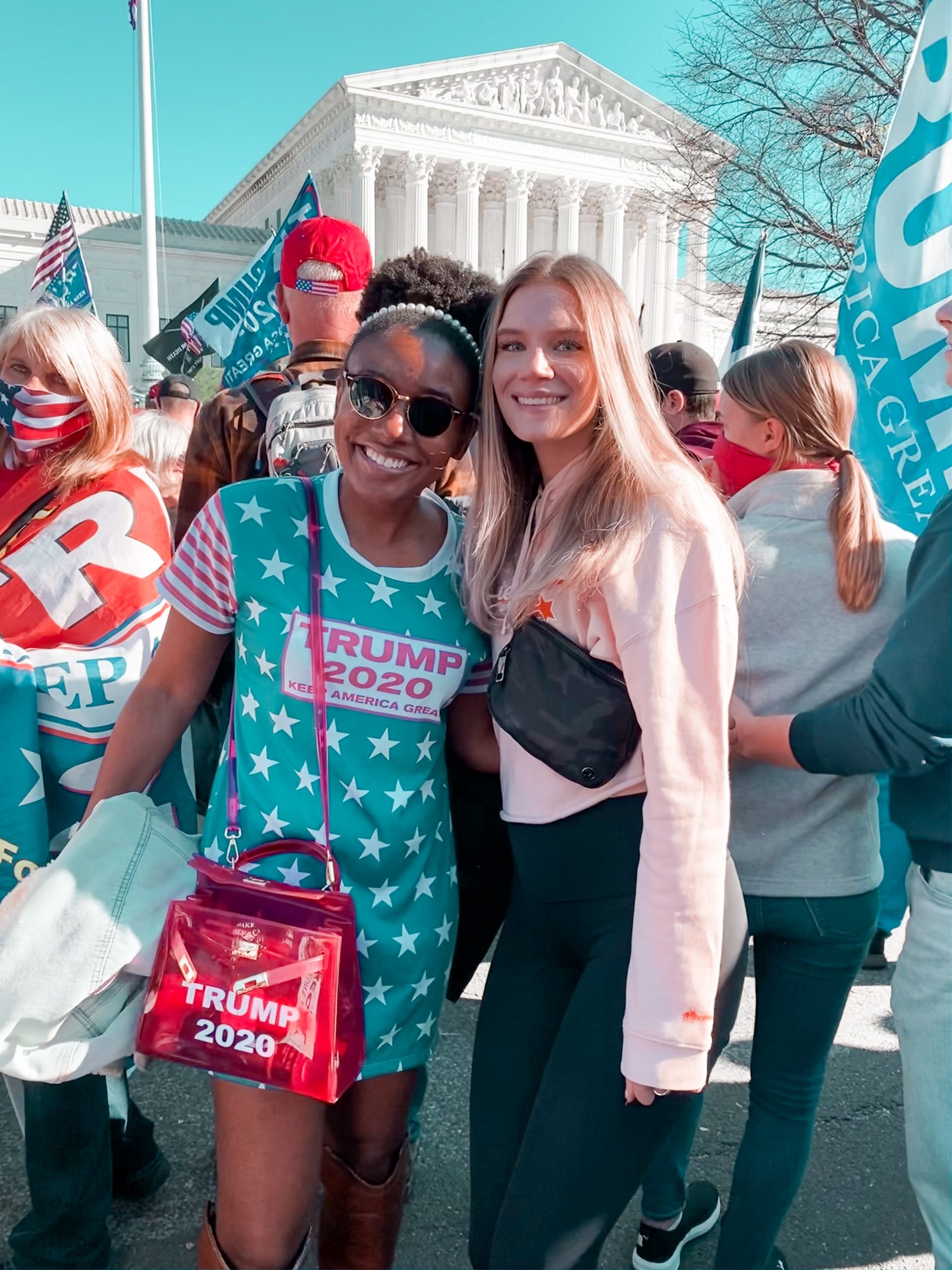 As we were walking, we started to realize just how much the crowd had grown. There were thousands and thousands of people. Every way you looked there were more and more, and they just kept going.

The people were extremely friendly. It felt like every 5 minutes a woman was telling me my bag was cute or she liked my dress.

When we got to the Supreme Court there were a few dozen “black bloc” (Antifa types) counter protesters. We were separated from them by the police and a barricade. It was honestly pretty uneventful. There were a lot of random chants breaking out on the Trump side, from “all lives matter” to “back to your basement” to “not my pedophile.”

At that point, there wasn’t any real escalation. It didn’t even look like the black bloc was trying to instigate even though many of them were expecting some sort of clash based on the way they were dressed. It probably had something to do with crowd sizes around that time. There were maybe 40 Antifa counter protesters on the other side of the barricade and the police, and Trump supporters literally as far as the eye could see. 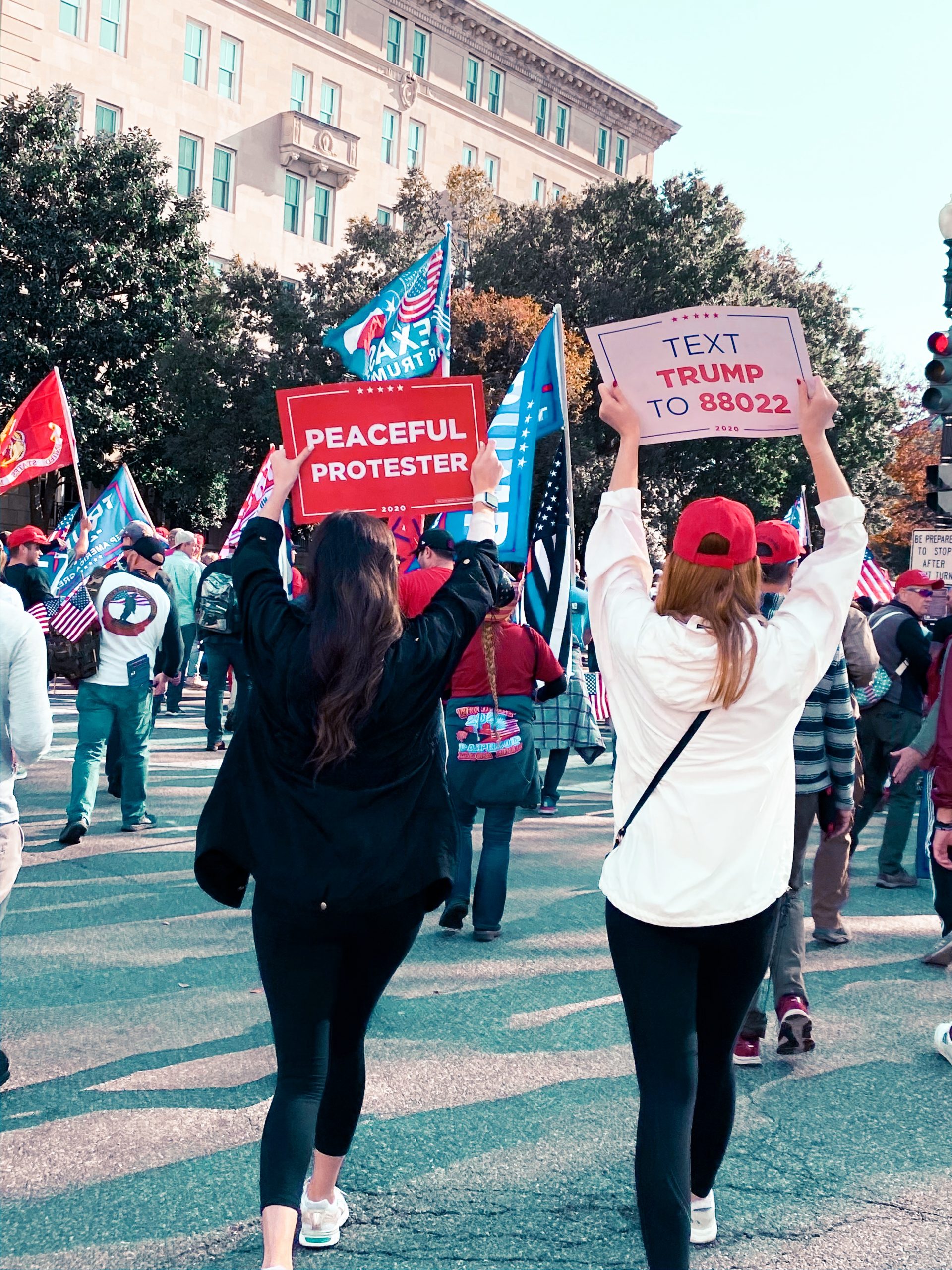 Eventually, the new friend I made and I decided to leave and get lunch. We were somewhat amazed that we had seen so few clashes between Trump supporters and Trump haters because we both live in the area and know firsthand just how deranged DC liberals can be.

There was one guy on the side of the road holding a sign that said something like “cock fuck every Trump supporter” and I’m sure some people probably said something to him at some point, but when I saw him I kind of smirked and kept it moving, and so did everyone else I saw.

We came to the conclusion that things would probably get more contentious once the sun went down and the crowds broke up, because Antifa is largely comprised of cowards that rely on the cover of night and people they can outnumber, and we were right.

I didn’t see any violence firsthand; after lunch I went back to my apartment and napped before going back out to to a lowkey get together that wasn’t really anywhere near the chaos.

I saw the violence like everyone else did — on social media after the fact. I saw the video of a Trump supporter walking with her children while leftists followed her and her children screamed and cried. I saw the video of Antifa throwing fireworks into a restaurant patio. I saw the video of that woman walking with her boyfriend, screaming in fear while the black bloc threw liquids at her, swarmed her and pulled at her. I saw multiple videos of grown men (and even one woman) running up behind random Trump supporters (both men and women alike), punching them in the head and scattering like rodents. I couldn’t bring myself to watch some of the more graphic stuff. I saw the screen grab of the woman who robbed a man that had been knocked out cold, with his unconscious body laying flat on the ground, with an ear to ear smile as she did it.

Here’s the firework going off inside the dining patio at PJ Clarke’s, from @Julio_Rosas11:pic.twitter.com/HieFooCthH

Anti-Trump protesters have made it clear that pro-Trump people are not welcome into BLM Plaza tonight.

This woman is heard screaming and crying as protesters follow them and throw things at her:pic.twitter.com/tLAosBaJk3

DC: A man was physically assaulted in front of Union Station

His face is bloodied from the physical assault pic.twitter.com/Dxz2BS1ytB

A fight just broke out as anti-Trump protesters began to follow a black pro-Trump woman walking through BLM plaza with her children. One person was detained — One of the little girls began to cry after the altercation pic.twitter.com/uxSvhDStSQ

People saw these videos and said the same things they’ve been saying for months; “America is unraveling,” “this is the beginning of civil war,” etc. And I completely understand where they’re coming from — especially as so many ignored what was happening, or worse — tried to justify it or explain it away.

But America isn’t America without cities, and it isn’t America without middle America. The great American experiment began in Boston, Philadelphia and New York. And what some people refer to as “flyover country” feeds the entire nation. Every pocket of this country contributes something unique, and makes us who we are. To me, America — whole America — will always be worth fighting for.

Of course, I’d be remiss in my duties if I didn’t call bullshit when I saw it on my own side. I know there was at least one video I saw going around showing a Trump supporter getting beat up, ignoring the fact that he had started the fight (proven by other video recordings). That was inexcusable, and I do think there were a handful of Trump supporters actually looking for trouble.

Quick note: Context is important (though it does not excuse violence). Here’s further video that shines light on what preceded one of the assaults making the rounds on Twitter tonight:pic.twitter.com/RVpFUnT1T2

I noticed a boy wearing merch from a white nationalist podcast, and at the rally itself I saw a group of kids that couldn’t be older than 22 hoisting flags from that same white nationalist podcast and trying to start seemingly innocuous chants. These were the majority of people I saw videos of in large groups at night, not at bars or restaurants or walking back to their hotels, but shouting, and chanting and giving incendiary speeches. Of course, I still believe in free speech for these people because I don’t think hiding bad ideas actually makes them go away. But I was still annoyed, knowing how these people operate.

They desperately try to weasel their way into places where they aren’t wanted so they can latch on and promote their hatred. Sometimes it’s more sophisticated than others. They love unrest because at the end of the day they don’t want the America we know and love, that has overcome so much, to survive. They want civil war because they think it will lead to a white ethnostate.

Many of them originally gravitated to Trump because they liked his tough immigration positions, and I’m sure liberals reading this are beside themselves, asking how I could support a man that white nationalists also support. The thing is, everyone has policy positions in common with shitty people. White nationalists also tend to have socialist, environmentalist, pro choice, and anti war leanings, they just have more sinister reasonings that led them to those conclusions. But I’m not going to apologize for sharing an opinion with someone I don’t like when literally everyone does. Im not going to say the sky is fuchsia just because a white nationalist said it’s blue.

I acknowledge that my side of the aisle isn’t perfect. But I follow people from all over the political spectrum, and expose myself to enough to feel like I got the full picture. Yes, there were instances where Trump supporters were looking for a fight — but they were few and far between. What I saw during the day and after the fact was an overwhelmingly peaceful and positive movement, and what I saw after the fact was terrorism. People were hunted down in the streets by violent mobs because of who they voted for. And anyone trying to downplay that is an enemy of the democracy they claim to cherish.