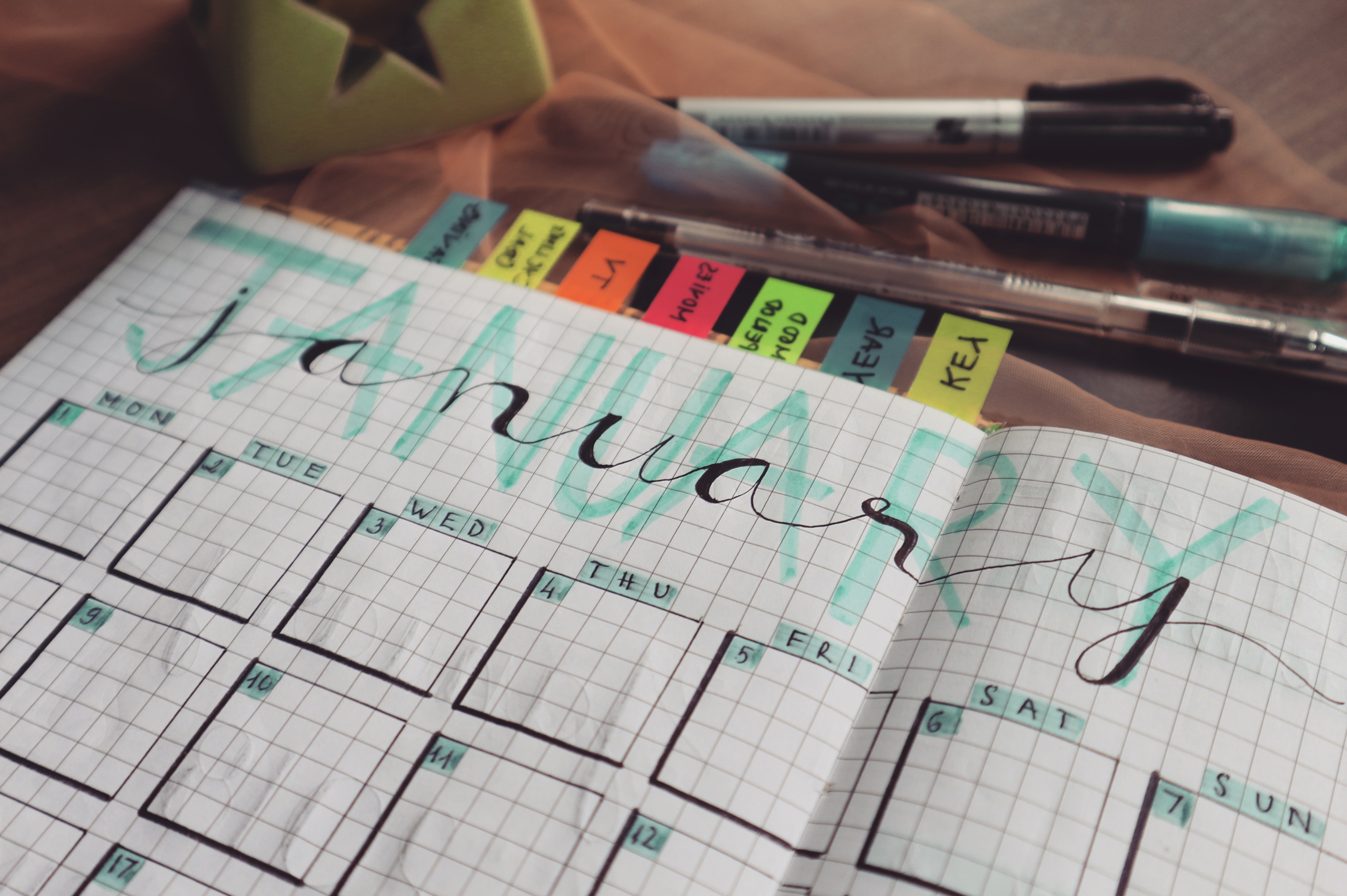 2017 was a wild ride of a year, and I’ve learned a lot about who I want to be and what I want the rest of my life to look like. As much as people love trashing New Year’s resolutions, I think that each new year is a helpful increment in assessing how far you’ve come and how far you have to go, as well as evaluating what changes need to be made.

Whether you love Trump or hate him, there’s no denying that he’s one of the most charismatic, spirited figures not only in politics but in the public eye, period. The man is 70 years old, works like a maniac, and fights like a pitbull — and what’s even more fascinating is that he takes no real health precautions. He doesn’t drink or do drugs, but he also lives off of fast food and Diet Coke. And we’re not talking the bougie fast food that bloggers get paid to make posts about on Instagram — we’re talking KFC and McDonald’s.

Donald Trump’s energy absolutely amazes me, and again, no matter how you feel about him as a President, there’s something to learn from a billionaire turned President with absolutely no filter in a culture of hypersensitivity.

We all know what we want in one way or another. We want money. We want good relationships. We want power. We want love. But so many of us are content to sit around waiting for these things to happen to us as opposed to creating actionable plans to make them happen.

We say we want to lose weight, so we eat healthy-ish for a week, go to the gym twice, and before you know it, we’re back at square one.

We say we want a promotion yet continue producing and achieving the status quo and convince ourselves that showing up to work and fulfilling the duties listed on your job description is somehow impressive.

We say we want to make new friends, yet hang out with the same four people and won’t go anywhere new unless someone comes with us, and spend the whole time talking to them as opposed to mingling.

In 2018, I plan on living with purpose and executing at extremely high efficiency. Being tired is an excuse we make all too often, and while I’m not going to be unrealistic, it’s an excuse I hope to use a lot less this year than I did the year before.

So here are a few (mostly) actionable ways I plan to make the most of 2018.

Wake up earlier – this is easily one of my greatest challenges. But a surefire way to make the most of your day is to be awake for as much of it as possible as long as you’re able to be alert and functional. When you’re waking up 20 minutes before you need to leave and rushing to get ready, you’re already starting your day in a hurried, flustered, and negative headspace. You don’t look your best, you don’t feel your best, and you aren’t in your best mindset because you didn’t give yourself enough time to wake up.

One alarm – part of how I plan to achieve this is by setting one alarm. I usually set 3 or 4 alarms around an hour apart to try to wake myself up, and while it may work for some people, I’ve realized that all it does is get me in the habit of going back to sleep. Even after my last alarm, I set more at 5 minute intervals because I want to keep napping and don’t want to get out of bed.

Music in the morning – Upbeat music in the morning is also another great way to wake yourself up. Most of us have those few moments when we wake up and just stare at the ceiling, and that’s usually when I fall back asleep. I hope that by putting music on immediately, I can start my day without taking 7 billion small naps.

Movement in the morning – I also am going to start doing small workouts in the morning, because it will not only wake me up, but I know I’m not going to go to the gym every day after work.

Morning smoothies – I can’t explain how or why, but smoothies wake me up like nothing else. They’re my hangover go to, and since I don’t eat breakfast very often, it’s a good way to make sure I’m starting my day right. I make smoothies at home with fruit as opposed to buying them because a lot of smoothies actually just give the impression of being healthy but are loaded with sugar and other things you don’t need, but to each their own.

Early morning gratitude – I’ve started the first few days of 2018 taking a moment to reflect on how grateful I am to be where I am in life and have what I have, and it’s already made a huge impact and lasting difference in my day.

Consciously and purposefully choosing a positive attitude – once you enter the working world, it’s really easy to become bored and resentful of routine. You wake up begrudgingly, throw on clothes that fit your dress code, and commute to work feeling tired and apathetic. This is easy to fall into at almost any job, no matter what you do or how much you love it. In the morning, I’ve started taking control of my attitude by thinking about how much I love what I do and all the potential that the day and year has to take me closer to where I want to be.

Learning from my experiences – As you may or may not have noticed in previous blog posts, I was dating a guy that I really liked, but it didn’t end up working out. I was really upset for a few days, but I had forgotten that just a few months ago I thought I would never care about anyone again. The fact that I cared in the first place meant that I had gotten over the guy I never thought I would. Instead of dwelling on not getting what I wanted, I realized that the blessing I got out of the experience outweighed the disappointment.

Accepting what I can’t change & taking complete ownership of everything I can – I’m extremely hard on myself, and to an extent, it serves a purpose. I will always be a work in progress, and always be looking to see how I can better myself, but I’m learning that some aspects of your life are never going to be 100% in your control, no matter how much you try. In my love life specifically, I’ve been so careful and self critical trying to figure out what’s wrong with me and why I haven’t been successful, but I’ve realized that some of the worst, most selfish, unstable, downright psychotic people I’ve ever met are in relationships. Somewhere between 7-20% of relationships are actually are worth envying, but the majority of what you see on social media is smoke and mirrors. People are in relationships that make them miserable because they don’t want to be alone or it’s less of a hassle than breaking up. While there are always steps you can take to better yourself, you can do and say all the “right” things and still end up single, and do all the “wrong” things and end up not only in a relationship, but married. A pretty Christian girl in her late 20s that wants to be a homemaker and is waiting for marriage is single, and a girl from my college that slept with a guy the first night she met him is now married to him. At the end of the day it’s a game of chance. While I think you’re better off blaming yourself for everything than blaming the world around you, beating yourself up over things you can’t control is just going to drain you and distract you from the things you can.

Being proactive and aggressive – People expect life to just happen for them. They want to make more friends, get in a relationship, advance their careers and lose weight, but without making any real lifestyle changes. As the saying goes, insanity is doing the same thing over again and expecting a different result. While I’ve been somewhat settling in for these past two months, this year, my plan is to actively pursue everything I want. My goal is to go on one romantic date per week, 2-3 friend dates with new people per month, and 2-3 networking events per month. I also want to get to a point where I’m in DC at least once a week, because that’s where the most opportunity is — both for work and play.

Stop thinking in “some days” – the easiest way to ensure that you never become someone is by talking about what you’ll do “some day.” There’s always an excuse you can find not to go after what you want or push back a plan but at some point you just need to buckle down and get it done or you’ll be watching someone that did achieve everything you wanted.

Being more conscious of my health – just because Trump can eat like a dumpster and still perform at such high levels doesn’t mean the rest of us can. I’m not going to lie to myself and pretend I’m going to become a grass fed Whole Foods hoe but I am going to be more conscious of what I put in my body and how I’m treating it.

Don’t Let The Pundits Play You »