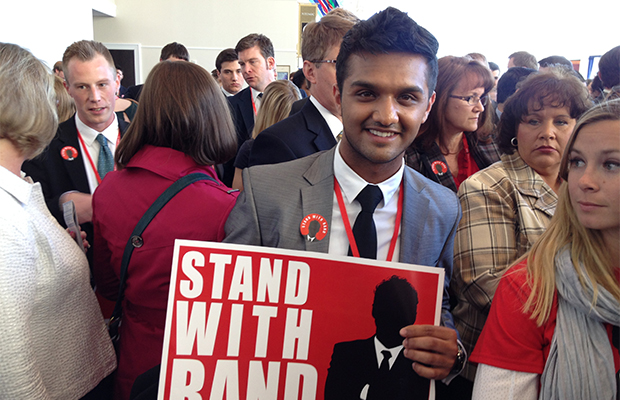 Sunday thousands of conservatives from all over the country packed their bags and checked out of the Gaylord, marking the end of the 44th annual Conservative Political Action Conference.

It’s been a strange two years for the political right, as different factions have clashed and butted heads leading up to and following the 2016 presidential election.

Libertarians, neocons, evangelists, tea partiers, Trumplicans, the establishment and everyone in between have found themselves both allied and at odds with their own, as this particularly divisive election has not only further polarized the two major parties and overarching ideologies in America, but polarized the smaller sects that make them up.

On both sides, we’ve seen the ongoing battle for control of fragmented parties reach all time highs within the last year. Wall Street sweetheart and establishment empress Hillary Clinton was challenged by populist, socialist Bernie Sanders, who claimed to represent the little guy and true progressivism. On the right was a much more complex and multifaceted infight. The general political right could be broken down into 5 major subsets in my opinion: there were the neocons for Rubio, hardliners for Cruz, RINOs for Kasich, libertarians for Rand, and Trumplicans; a politically diverse group only bound by their unyielding support of Trump – all eventually falling into one of three more telling categories by Election Day: Enthusiastic Trump, Reluctant Trump and Never Trump.

From what I observed, people that supported Rubio did so because they liked the way he made them feel moreso than anything else. He’s a charismatic, (allegedly) handsome, young, articulate politician and as the son of Cuban immigrants, embodied not only the American dream, but a major opportunity to deliver the GOP’s message in a light that would entice groups it has historically struggled with. To me, he represented a sort of “public relations politics” that prioritized the party’s growth and appeal to certain demographics over the base and its interests. In my opinion, it was a major factor in determining Trump’s victory as the republican nominee.

And then, there was my tribe – the #CruzCrew that wanted more than anything a steadfast conservative candidate that was seriously committed to the constitution and could be trusted to take on the Washington establishment. We wanted a fighter, and we wanted someone that could stand firm in their convictions even under pressure. Admittedly, we weren’t focused on pragmatism or the uphill battle he had not only with democrats but his own side.

Kasich supporters often touted the “compassionate conservative” mantra that Rubio supporters did, and full disclosure: to me that was just more flowery coded language for watering down our agenda in the name of popularity. But unlike Rubio supporters, I could not recognize any actual grounding in conservatism in them. Like their chosen candidate, they could have easily passed as moderate democrats on a number of issues, and seemed to be committed more to the appearance of sophistication to liberals than the ideas they claimed.

Despite my own views leaning heavily libertarian and my admiration for Rand Paul, I was extremely disappointed in the libertarian party this year. Austin Peterson was a joke, and Gary Johnson was an embarrassment. In a year with such wildly unpopular democratic and republican candidates, the libertarian party had a unique opportunity to make its case to the American people- especially when the country’s views increasingly favored their own in many respects- they completely blew their chance with some of the least competent candidates they could have found.

Trump’s supporters were a phenomenon in and of themselves, and hard to pinpoint or define unilaterally. Whether they were democrats or tea partiers, his support seemed to stem primarily from his own celebrity and his unwavering anti-political correctness.

As the candidates dropped like flies against the one and only Donald and Election Day grew nearer and nearer, we all decided we had to make our choices. And it got ugly. The chairman of the largest, most highly anticipated annual celebration of conservatism was shunned in his own social circles for supporting Trump after he had been named our nominee. People said things that they couldn’t take back, and relationships on the right were destroyed. But at the end of it all, Donald Trump was elected president of the United States, and made the choice that few trusted him to make; a conservative Supreme Court appointment. And as many differences as we may have in opinion on Trump as a man, a president, or the face of our movement for the next 4-8 years, I think there’s a lesson to be learned.

While it did take me quite some time to come around, I have grown to deeply admire and respect Trump. I couldn’t be prouder to have voted for him. I’m equally annoyed by colleagues and acquaintances on the right who let their personal opinions and biases of him cloud their judgment of his actions; he’s either always right or always wrong to these people. And as much as I want them to shut up and close the twitter app, there really is room for all of us in this movement, and in this context, there is actual, tangible strength in diversity. This extends not only to diversity of thought but to diversity of lifestyle; I believe we are made stronger by embracing both the sober Sallies driven to conservatism by their strict adherence to their faith as well as the grand ole party animals that care much more about lowering taxes and rolling back regulations than they do the social issues. As much as I will eye roll at people on my own side, we are ultimately so much more powerful when we can agree to disagree like adults while continuing to advance the agenda that we share.

« The Introvert’s Guide to CPAC