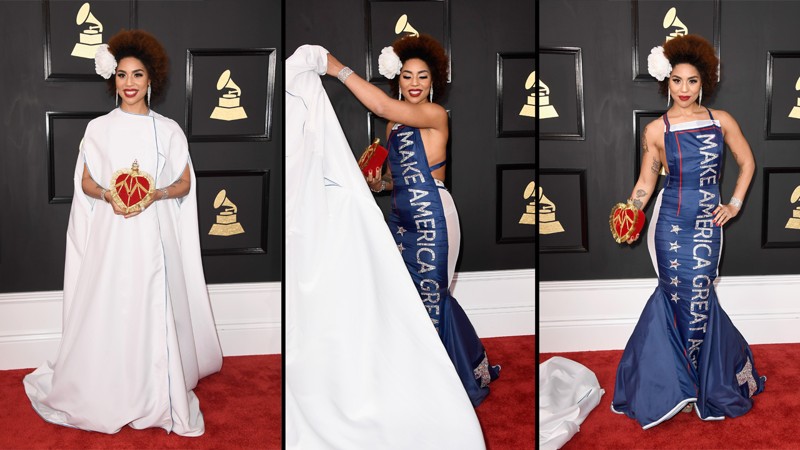 When Joy Villa first revealed her infamous Make America Great Again dress at the 2017 Grammys, like most Trump supporters, I was blown away. A gorgeous black woman (who wore her hair naturally!!!) was at one of the most prominent liberal red carpet events in Hollywood — literally in the belly of the beast, and had chosen to publicly support our President. It was yuge.

But just weeks later, I started to notice things that made me question her intentions. For example, I noticed that her music…actually isn’t good. Like, at all.

Sorry not sorry but the song that Trump supporters took to the top of the iTunes chart like a week after the Grammys was trash, and I wasn’t going to buy a song that sucked just because the singer was a Trump supporter.

I noticed her aggressive self promotion on social media — and that in doing so, she was constantly using Trump and “MAGA” to capitalize on her new found attention. Every day she was tweeting something along the lines of “help me, buy my shit, I voted for Trump” and call me crazy, but if you actually have anything of value to offer, that shouldn’t be your selling point.

And when she released a “Make America Great Again” song…it also sucked, but Trump supporters hyped it up and bought in anyway.

As the months went by, I also noticed that she was everywhere, doing everything… while never actually doing anything. She was making videos walking around New York City in a Trump hat…she was shooting guns and posing for pictures…she was appearing on podcasts, but what was she actually doing that wasn’t ultimately just self promotion?

Don’t get me wrong. A LOT of people that both support and hate the President have used his name relentlessly for their own gain, and to an extent there’s nothing wrong with that. I respect the hustle. The liberals that claim to hate capitalism so much are CASHING IN on anti-Trump “resistance” merchandise, and one of my best friends made over $100k last year selling pro-Trump postcards and shirts on Twitter.

And just look at the replies to Trump’s tweets. There are Trump supporters and Trump detractors replying to everything he writes hoping that it will lead to more followers for them.

But there’s a fine line between business savvy and opportunism, and in my opinion, Joy Villa has always been on the wrong side of that line.

My friend that made bank selling Trump merch on Twitter always loved Trump. He loved Trump before Trump even announced he was running. I think it was 2013 when he tweeted that Trump would be president one day. But he would have been someone with or without Trump. Before he got into politics, he had a business plan and a strategy.

Before Trump, she was entirely irrelevant. She was a 30 year old failed musician with no real accomplishments under her belt. Trump WAS her business plan. And there inlies the problem — especially when there’s no way to really know how genuine her support for Trump is in the first place.

I know that people’s political views are ever-evolving in our current climate. If you know me, you know that I worked for, interned for and voted for Ted Cruz (in the primary). Within the week of Ted losing Indiana, I was grappling with the idea of voting for Trump. A month or two later, I finally made up my mind and decided that I would vote for him. And my issue was never that I thought he was a bigot — it was that I didn’t think he could be trusted to keep his promises or push a conservative agenda.

But Joy Villa didn’t even vote for Trump on Election Day. On Election Day, she was promoting third party candidates. And in all fairness, maybe she was hiding what she really believed in order to save face in Hollywood — but then again, she had no career or reputation to protect at that point in the first place. 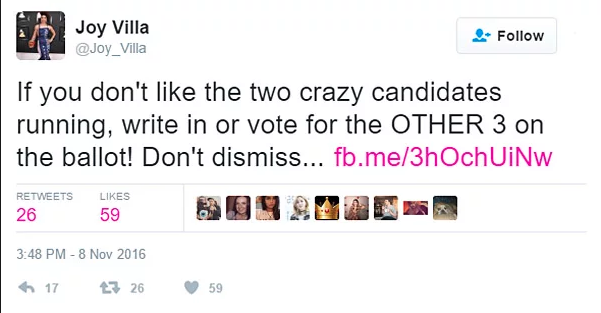 I also noticed that after she was given a platform, she had nothing particularly original or intelligent to say. A lot of what she had to say when it came to politics actually didn’t make any sense and boiled down to incoherent cheerleader jargon.

So when tweets started circulating about Joy’s past in scientology, I can’t say I was exactly surprised.

And while I do find it troubling that Joy Villa put on an air of devout Christianity to appease voters, that’s not what really bothers me — because let’s be honest, every politician (including Trump) does that. What bothers me is that it seems like she was trying on different personas until she found one that fit; IE one that she could use as a Hail Mary for her miserable musical and professional endeavors.

And when Joy Villa accused Corey Lewandowski of sexual harassment for slapping her ass, I couldn’t help but feel like this was yet another outfit she was trying on to see where it might take her.

Before I go any further, I want to make it clear that I don’t think anyone should be pressured by political allegiance to remain silent on wrongdoing on their side of the aisle. But I also can’t ignore context. Joy is a professional attention seeker and in the Politico article, there’s an implication that Joy was offended at Corey’s perceived indifference bordering on annoyance:

Villa, 31, said she was circulating in the ballroom of the invite-only party with a friend, who brought her over to introduce her to Lewandowski, whom she had never met. Her first impression, she said, was that he seemed dismissive of her, and rolled his eyes when he thought she wanted to pose for a photo with him.

“I said, if you’re busy, don’t worry about it, we don’t have to take a photo,” Villa recalled telling Lewandowski, who remains close with the president and attended a contentious Oval Office meeting on political strategy earlier this week. But Villa said another reveler pushed her toward him and she ended up standing next to him and posing for a picture, despite his seeming lack of interest.

Would she have felt differently about the incident if he was more receptive? Considering she said that she wanted an apology from him on Good Morning America, I wouldn’t be surprised if that was the case.

I literally wasn’t going to write this post until I saw her God awful interview on Good Morning America, but umm…I’m going to go out on a limb and say that if you have to be told by a detective that you were “sexually assaulted” as opposed to “harassed,” you probably are doing a disservice to legitimate victims by acting as though this was a deeply traumatic experience for you.

As a nobody 23 year old that recently moved to the DC area, I know for a fact that if I was at an event and a Republican man more powerful and connected than me slapped my butt, I would feel embarrassed and upset too. But as someone that was undressed and groped in their sleep when they were 15, I take issue with people throwing these phrases and equating “uncomfortable experiences” with actual disgusting, predatory behavior.

And when asked about Trump’s accusers she said she could “only side with something that happened to me,” but posted this on Instagram…

…yeah. Joy Villa is a fraud with no substance, and has been for quite some time. She is trying to use the #MeToo bandwagon the same way she used the Trump one, and is getting what she’s long overdue for.

But more than anything, I need to hold myself accountable. I noticed the signs of a fraud months ago, but remained silent because I didn’t want people to think I was jealous or a hater. It’s not like my voice would have mattered in the long run, but I think that it’s hypocritical of me to accuse people of having no conviction without admitting my own failures.