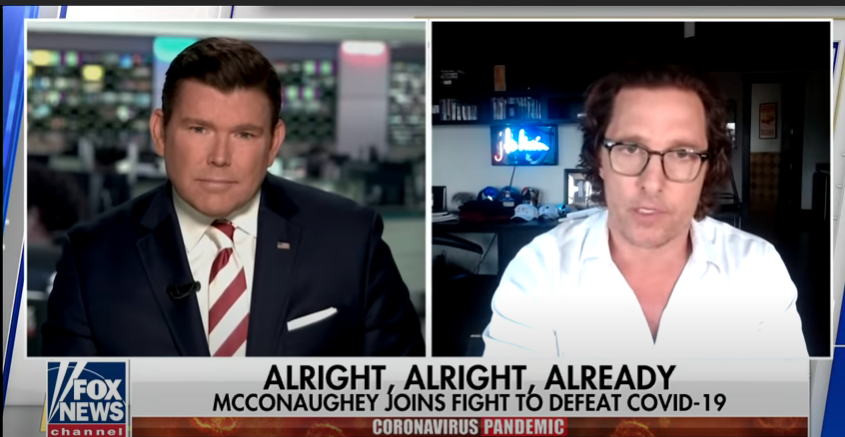 It’s rare that a celebrity has anything worthwhile to say about politics or current events. It’s usually the same boring black and white 2 minute PSA video level commentary with the occasional right winger thrown in the mix that usually doesn’t have anything more interesting or original to say. There’s just an element of novelty to a celebrity willing to publicly declare right of center views. We can call Kanye the exception.

So when I saw Matthew McConaughey’s interview with Bret Baier, I have to admit I was pleasantly surprised.

Granted, I only saw a clip. But when celebrities talk about politics these days, they’re usually criticizing the President. It’s popular to do in their circles. And that’s all good and fine, we can agree to disagree, but there’s rarely ever any real thought put into these criticisms.

Don’t get me wrong, I have just as much to say about airhead pundits and public figures on the right completely void of substance. But the “F*** Trump” rhetoric has gotten so stale. It’s like I’m stuck in a comedy special where the star only knows how to tell genital jokes or can’t complete a joke without a sound effect or 7 expletives. Like, please say ONE interesting thing. That’s it. That’s all I’m asking for.

What Matthew McConaughey said shouldn’t have been shocking or groundbreaking. But it was.

His message was simple: we should be united as a country against coronavirus; the invisible enemy instead of turning this into yet another partisan political fight.

I don’t think most Americans, regardless of where they fall on the political spectrum, wanted this to devolve into what it has. If you wear a mask, you’re some kind of brainwashed liberal. If you don’t wear a mask, you’re a conspiracy theorist conservative. If you want the economy to reopen, you’re a corporate shill that wants people to die. If you’re more cautious about reopening, you’re really just hoping to see Trump take the blame for the fall out and use it as a talking point to defeat him in November.

And I won’t pretend that I’m above partisan suspicions right now. Sure, I like to give people the benefit of the doubt. But I can’t ignore the patterns I’ve seen as much as I wish I could. I think most people want the same things. I think most people just want to see our country recover — both medically and financially. But the sad reality is that more people than we’d like to think see this pandemic as an opportunity for political gain.

But if there’s one thing most Americans should be able to agree on, no matter who they voted for in 2016 and no matter who they’ll vote for this year, it’s that Matthew McConaughey was right. If there was a time for us to come together and look past ideological divide, it’s now. And even though there are people with all the wrong intentions right now, we should be able to recognize that most of us are good, most of us want what’s good for each other, and most of us want to do right by America, even if we have disagreements on methodology.

« Kayleigh McEnany’s Coronavirus Response Gave the Media What They Deserve