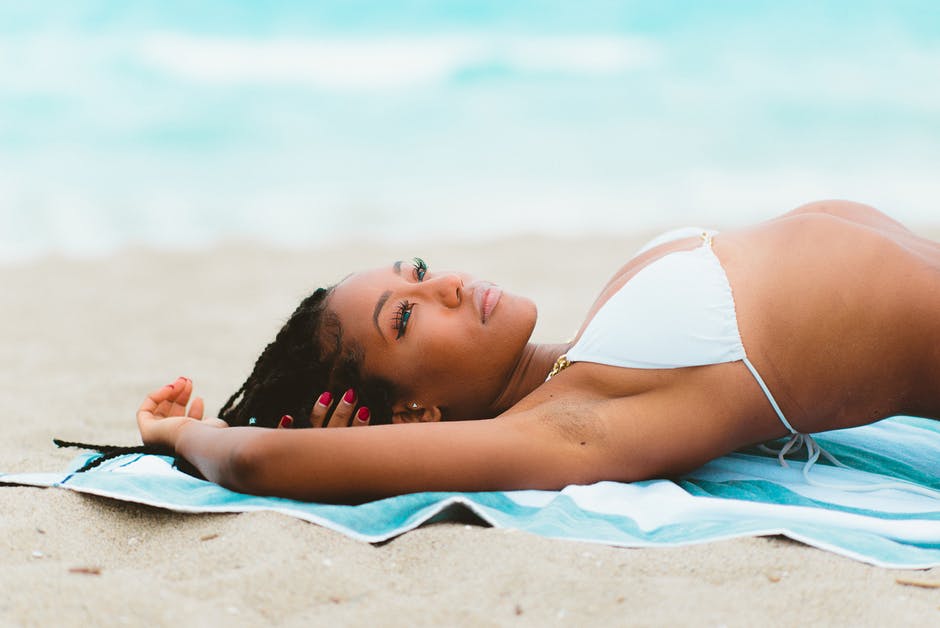 Laser hair removal is an increasingly popular procedure. Why did I consider it? In a sense, my mom really screwed me over when she decided to do the horizontal bop with my father, bc I’m hairy af thanks to him. In another sense, I lucked out because his genes made me darker, and my hair less noticeable.

I’m not sure exactly how old I was when I noticed a snail trail and started shaving, but I think it was around the beginning of college. I only shaved it once or twice before noticing these hideous bumps appearing, and immediately stopped, but it was already too late. I tried tweezing and Nair, thinking they wouldn’t irritate my skin as much, but still had no luck. The bumps were still as big and ugly as ever. Summers became extremely embarrassing for me, and I was desperate to hide my stomach not because I was fat (at first at least) but because of the ugly marks between my belly button and panty line. I even tried putting foundation on it a couple times.

Last summer I decided I’d had enough and started doing more research on long term, permanent solutions. Time and time again, I was led back to a procedure for rich people called “laser hair removal,” where hair follicles were destroyed over approximately a year and a half of treatments.

The more research I did, the more it seemed like my only hope of correcting the bumps that had been ruining my pictures summer after summer. I finally decided to take the plunge, and start getting laser hair removal.

You know I love you people because I’m sharing this hideous up close and personal before picture just to show you the progress I’ve made. This is after 5 treatments. 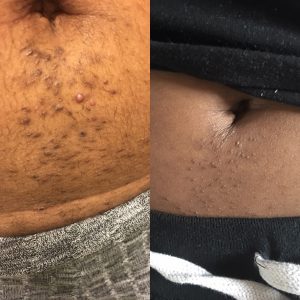 Laser hair removal only recently evolved to a point where it was safe for dark skin tones like mine. I’ve read quite a few horror stories about laser hair removals for dark skin gone wrong, virtually disfiguring the patients. As a result, I refused to chance this procedure on a groupon deal or any clinics that I felt had even the slightest chance of scarring me for life with a botched laser job. I also didn’t want to spend money at an establishment with subpar equipment where I’d see hair growing back a year or two down the line. As a result, I unfortunately have one of the most expensive providers on the market. But you don’t necessarily have to.

I’ve seen groupons available pricing 8 treatments for $200. Believe me when I say that’s an incredible deal, and multiple ballparks below what I’m paying. The ideal candidate for laser hair removal has dark hair and pale skin, and if you’re anything close to that, I would totally recommend giving a cheaper option a shot. Even if you have darker skin, it still might be worth a try. If you can avoid spending thousands of dollars for hairless, perfect skin, you absolutely should.

A downside of laser hair removal is that you can’t tweeze or wax your treated areas in between appointments. But the good news is that after a few treatments, you start noticing your hair taking longer and longer to grow back.

Another downside is that it’s actually pretty painful, and I like to think I have a pretty decent threshold for pain. When my friend that got laser hair removal warned me about the discomfort, I didn’t really take her seriously. I got my first tattoo on my ribcage when I was 17, and it hurt enough for me to squeeze my friend’s hand really hard, but it really wasn’t that serious. I got a tattoo on my shoulder and two tear inducing piercings the next year. So naturally, I thought I was prepared for the lasers that awaited me. Silly, silly me.

The good news is that if you’ve gotten Brazilian waxes on a regular basis, you’re probably equipped to handle the intensity of lasers. The bad news is that they still hurt. A lot. But if you can sit there and take it like a champ without flinching or taking breaks, you can easily be done in 20 minutes or less depending on how many areas you’re having treated and how big they are.

If you’re still on the fence, I think I have some valuable insight.

« Why Making Friends After College Sucks