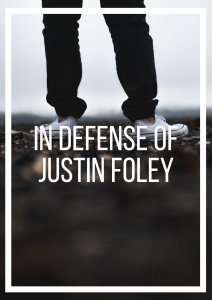 In book turned Netflix series 13 Reasons Why, Justin Foley is one of the most prominent characters. The show starts with a cute flirtationship developing between the main character, Hannah, and Justin, written as a charming but troubled jock. Later in the series, he begins dating Hannah’s ex best friend, Jessica, after they bond in summer school. About 6 weeks into their relationship, Jessica throws a party. Everyone’s there, it’s lit, people are having fun and making out. But the night takes a dramatic turn after Jessica passes out in her room and Justin leaves her there.

Many people that watched the show have expressed scathing disdain for what Justin didn’t do that night, and while I can understand it, I think many of Justin Foley’s critics are letting their emotions lead them blindly.

Jessica didn’t deserve what happened to her. Justin could have done more to try to stop Bryce. But people too easily forget that he actually did try to stop him. Bryce pushed him to the floor and locked the door. He could have kept banging. He could have tried to rally other athletes and tried to break down the door. He could have tried clearing out the party and calling the cops. But like everyone else at the party, he was not only drunk, but a drunk high schooler. As crass as it sounds and though I don’t think this was Justin’s concern, I feel the need to point out that when high schoolers drink and something goes down, their priorities are usually not getting caught by the police or their parents.

I won’t condemn Hannah for her lack of action that night, because I’ve never been in a situation like that and can’t speak to what I would or wouldn’t have done. But what Hannah and Justin had in common that night was that they were afraid. But Justin’s fears had different implications than Hannah’s.

Justin lived with a drug addict mother that kept a series of criminal, abusive boyfriends. What Justin had at school, Hannah had at home and what Hannah lacked at school, Justin lacked at home, though arguably more severely. He was constantly being kicked out of his own home and counted on his friends for his actual, literal livelihood on more than one occasion. And no matter how awful of a person he was, Bryce was the only one of his friends that was consistently there for him.

People say that Justin was trying to protect his friend by waiting so long to tell Jessica what happened, but I don’t think that’s true. I think that Justin, more than anything, wanted to protect himself. To Justin, Bryce represented security. He represented warm clothes on his back, food on a plate and a roof over his head when things went awry at home. And before everyone on the internet asserts that they would have gladly become homeless at the age of 17 to prevent a rape, I commend you for your idealism, but you’re probably lying to yourself.

What Justin probably wanted more than anything was for everything to be normal. He wanted to keep his beautiful girlfriend and keep his safety net. But it never could, and it never would.

It’s just a show, but it’s easy to degrade people and judge them and say what you what have done differently in situations that you’ve never been in, and hopefully never will be. It’s easy to be altruistic behind a screen and it’s easy to pretend things are much more black and white than they actually are.

Justin Foley was kind of an asshole, but no more so than any other average high schooler, and no more than Hannah Baker. Jessica had no obligation to stay with him after finding out what he took so long to tell her, but he wasn’t the monster he’s being made out as.