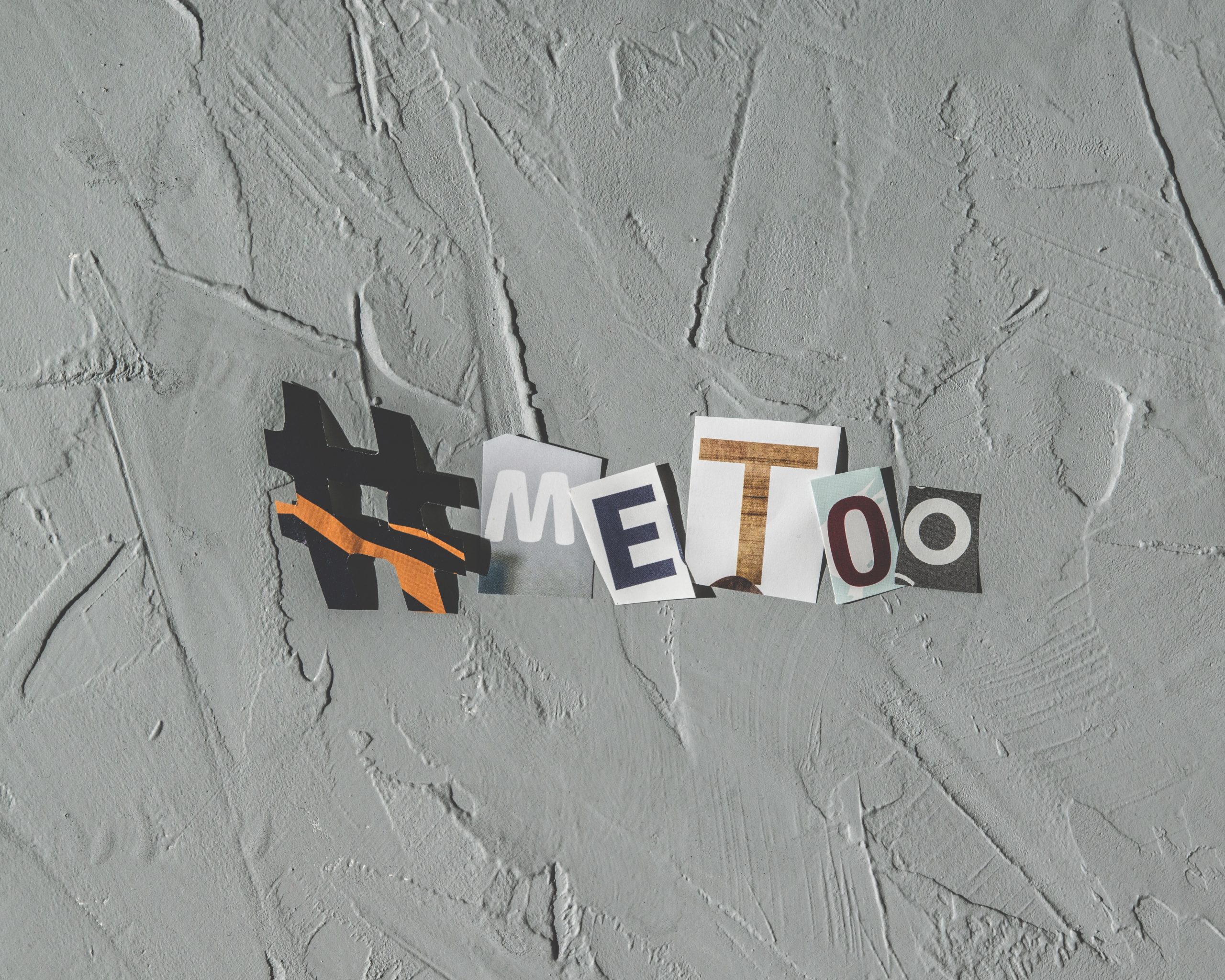 When Justice Kavanaugh was accused of sexual assault after President Trump first nominated him, I was annoyed. Because while I was waiting to draw a conclusion based on facts, people that hated the President were pretending to care, and people that love him were rabidly defending a man and viciously attacking a woman — neither of which they’d ever known.

I wanted to scream. And I want to today.

I don’t like to think of myself of a victim of what happened to me. It’s something that happened that I wish didn’t. But it doesn’t define me. I’d be lying if I said that being sexually assaulted hasn’t affected how I see these things though, because it does.

I understand why someone might not want to come forward on a personal level, because I didn’t. And I’m also honest with myself about the many things that could motivate someone to make up something that never happened.

When I hear people blindly believing accusers or the accused based not on the evidence, or even principle — but an ideological allegiance, I get upset.

Because no matter who’s accused or who’s accusing, very few people actually care about truth or justice or what’s right when it comes to politics. They care about what helps them and what hurts their opposition. And after this much time in this world, I shouldn’t be surprised. I’m not. I’m just at my wit’s end.

I didn’t want to write about this so I haven’t been keeping track of all the abhorrent, glaring hypocrisy I’ve seen on both sides of the aisle in the face of the Tara Reade allegation. With a simple key word search on Twitter and an ounce of critical thinking, I promise the examples are abundant and easy to find.

Democrats and Leftists that “believed all women” when it was politically convenient were suddenly bending over backwards to mitigate the developments with Tara Reade — even as more and more damning evidence came up. And it didn’t stop anywhere close to there. She is being raked over the coals, and she has been ever since her story began to gain traction. There are people on Twitter saying they’d vote for Biden if he “raped 100 women.” A woman said that she would vote for her assaulter to stop Trump. I know that sounds crazy so I went back to find the tweets so you knew I wasn’t exaggerating. Believe me when I say that’s only the tip of the iceberg. Or don’t. I don’t care. 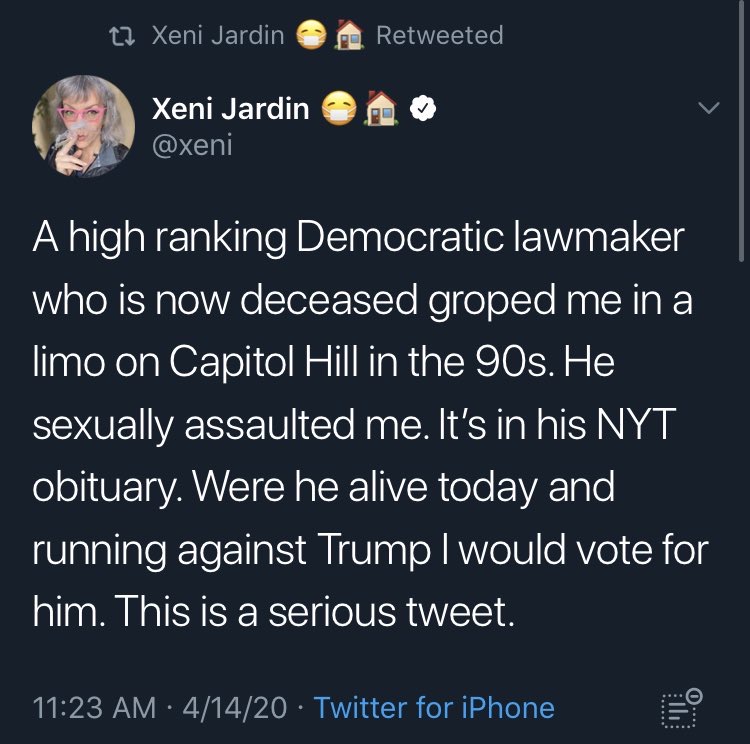 Of course it all hasn’t been that extreme. But it’s all been bad, and underscored what the intellectually honest have known for years: this isn’t about victims, and it never has been. 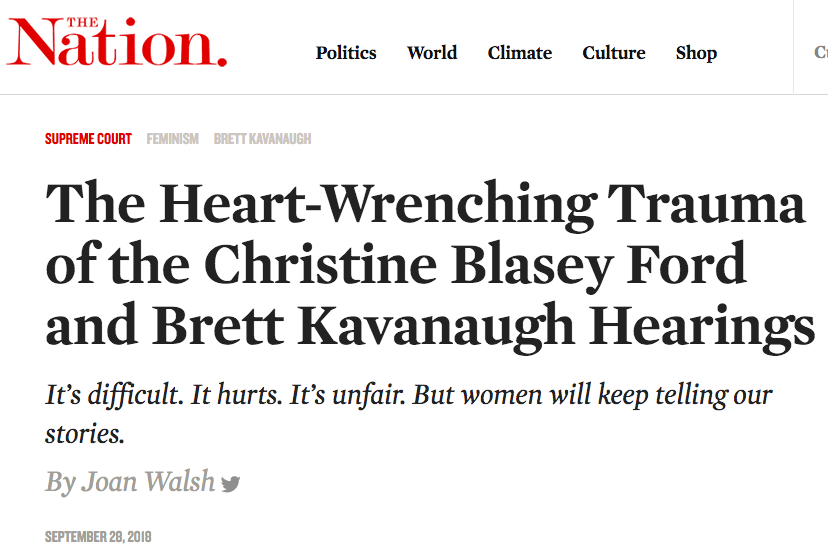 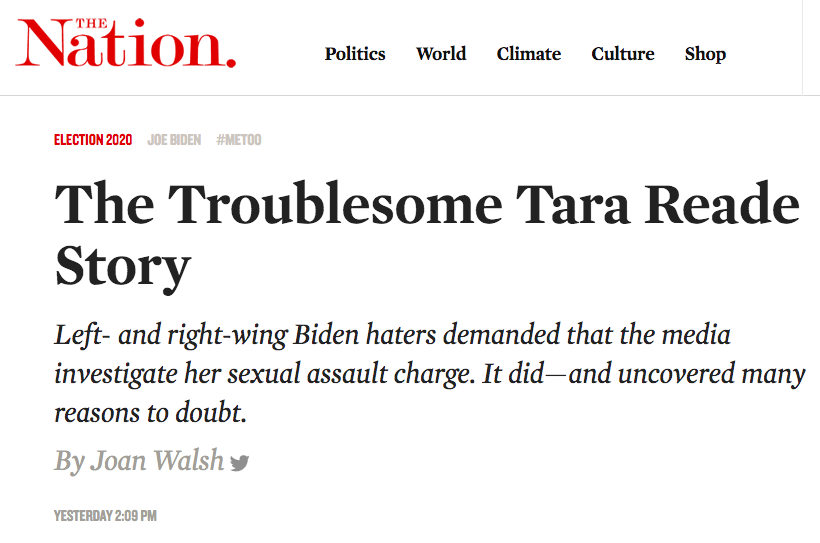 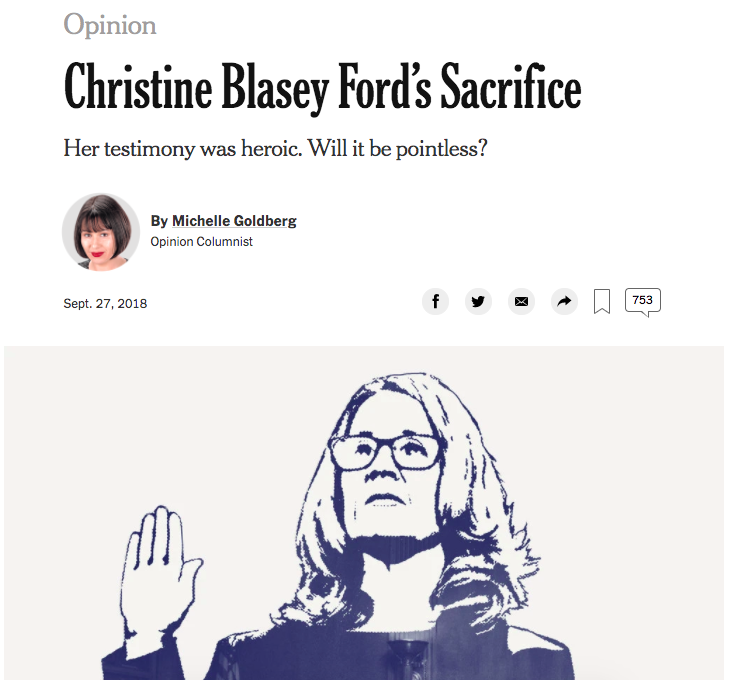 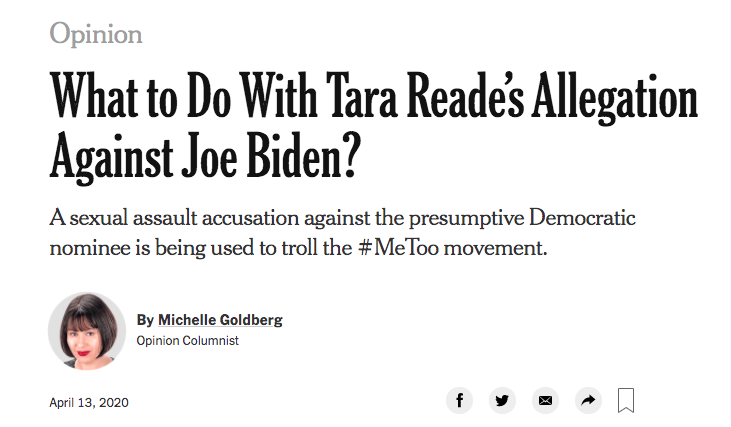 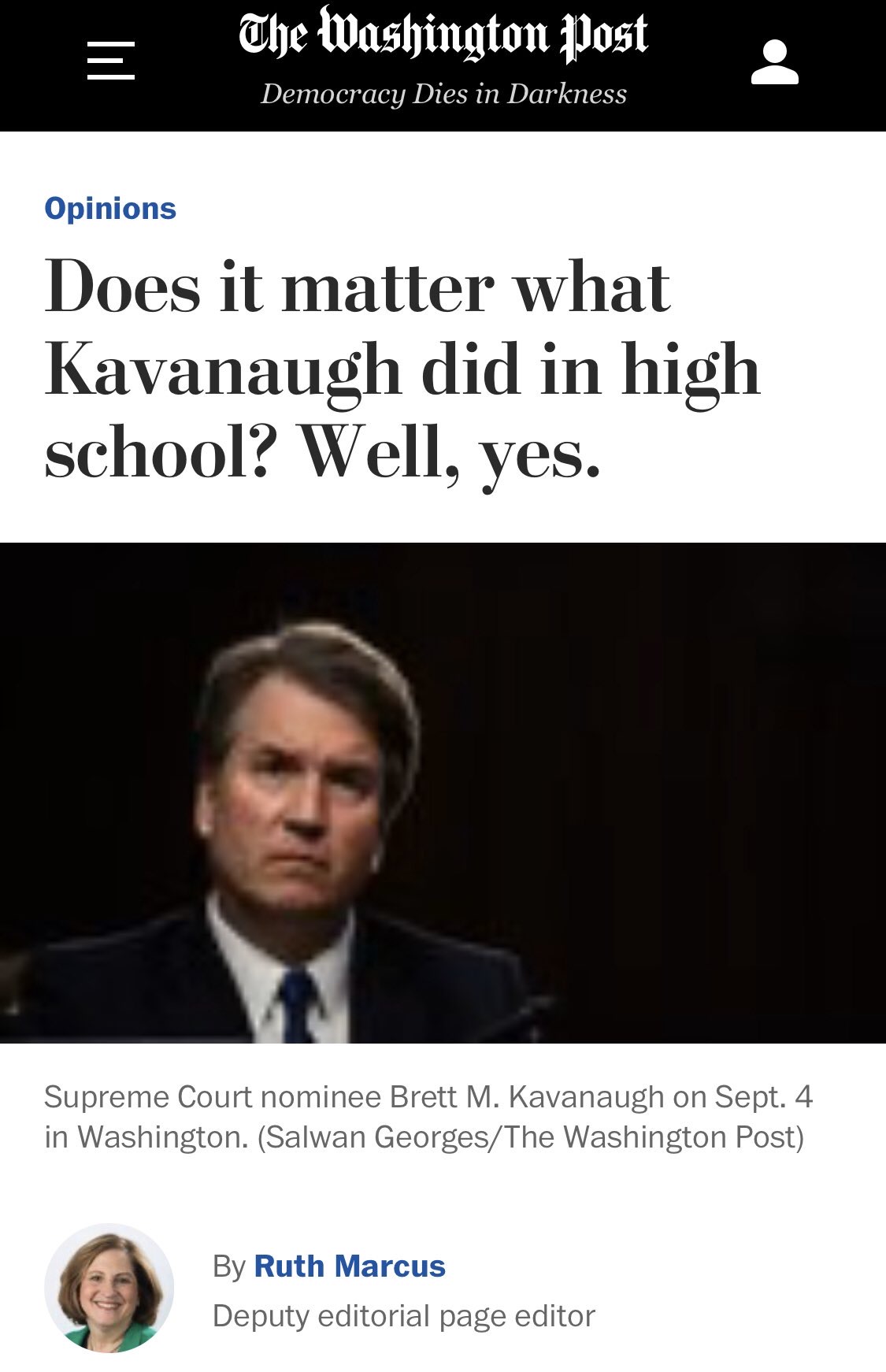 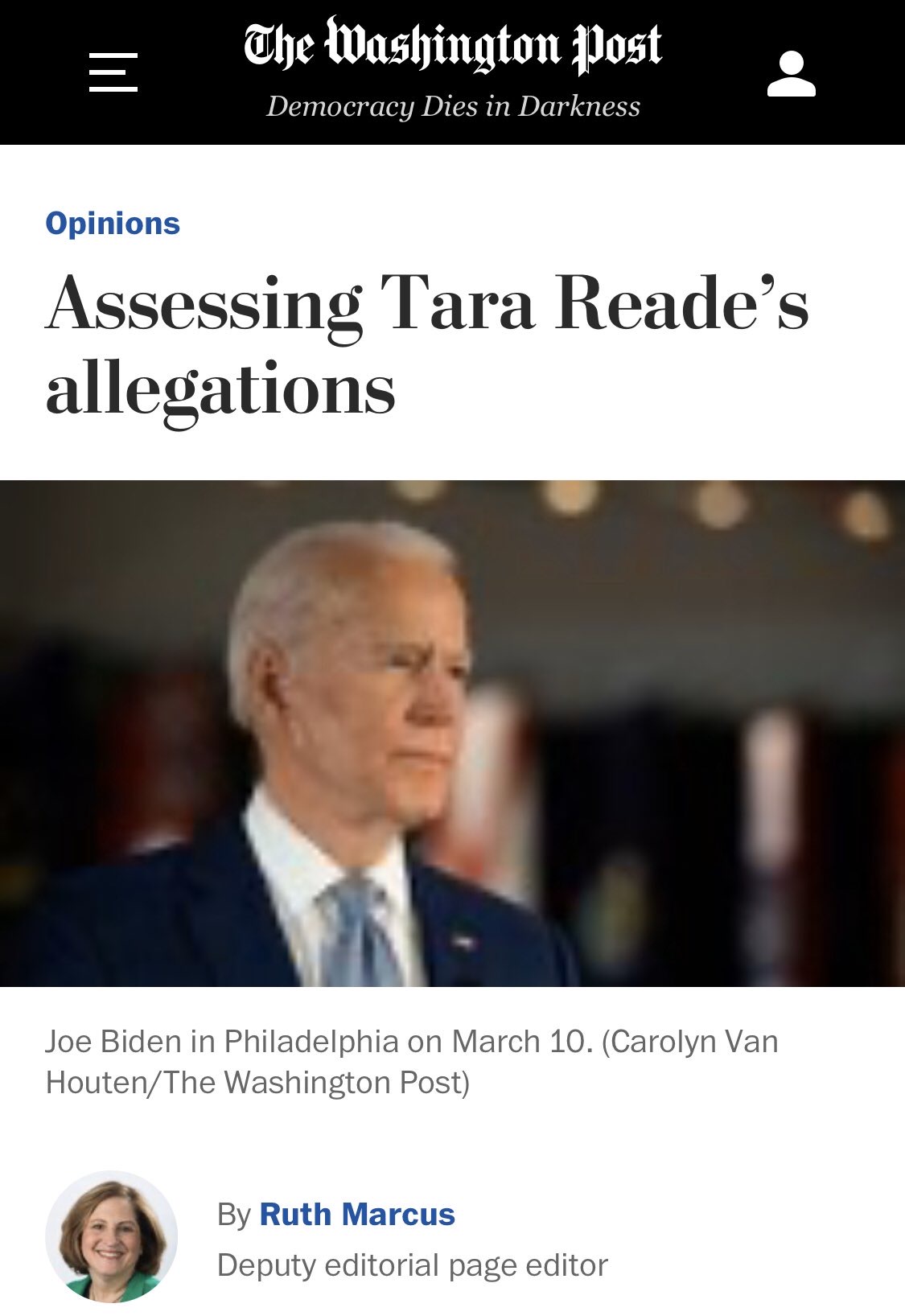 Note: these aren’t just from the same publications, these are by the same writers.

And I wish I could say the right has been better, but we haven’t. People on my side of the aisle have been treating Tara Reade like a talking point, like a punchline, like a prop…but not like a person that experienced something horrible. They’re parading her around like a Mardi Gras float and suddenly “believe women” when they relentlessly attacked Kavanaugh’s accusers before there was any real information available.

Don’t get me wrong. I believe in due process, and I believe in waiting for evidence. Just because someone is telling the truth doesn’t mean that someone else is. Because just like people will always assault, and murder, and rape, they’ll always lie — and as much as we might like to think that no one would lie about something so serious, they still do.

But if the way you treat accusers depends on the letter behind the name of the accused, you have no place in these conversations. Your virtue signaling and grandstanding isn’t for victims, it’s for you. It isn’t social justice, it’s selfish. You’re inflating your ego with empty words on an issue that doesn’t matter to you.

While one political party has repeatedly branded itself as the party of “women” and projects an image of female empowerment, rape and sexual assault aren’t confined to an ideology. They never have been and they never will be. Unless you’re prepared to talk about it when it makes you uncomfortable, and when it sheds an unflattering light on your side, you shouldn’t be talking about it at all.

« When Self Improvement Sucks

Why You Should Let Yourself Look Stupid »