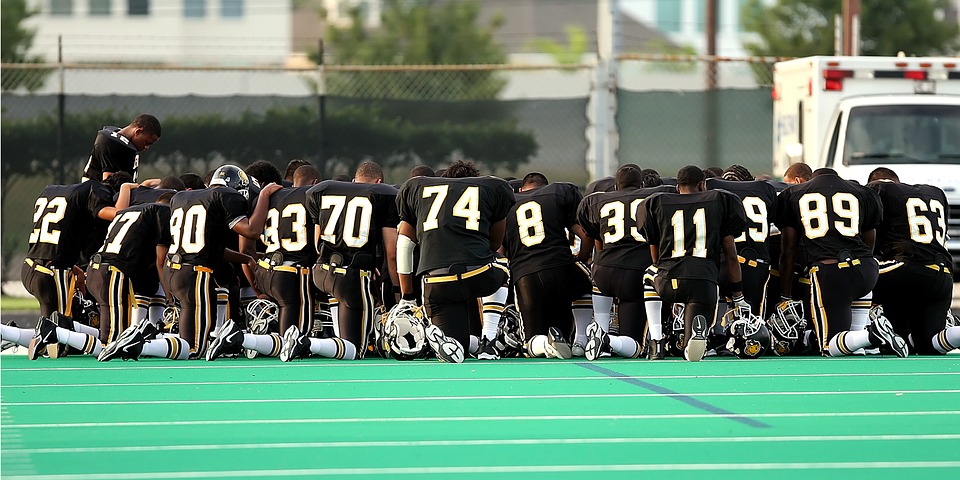 This kneeling thing is getting out of control. I know that sports have always had somewhat of a political undertone, but sports – football especially – have always been a uniter to me. Sports is where people from all walks of life and with all kinds of opinions could bond with people they had nothing in common with but their love of the game and their team. As cliche as I’m sure it sounds, Remember the Titans is a movie that always spoke to me about the power of football in divided times. In the movie, football gave young men the opportunity to put their prejudices aside and get to know people for who they really were. Their success as a team depended on their ability to see past their differences. And even though it’s a cheesy movie, there is truth to the themes and message.

Although Boston is seen as a beacon of progressivism and liberalism, it actually has a very complicated and uncomfortable history. While I was at the best high school in Boston, there was definitely racial hostility. No one was shouting “nigger” in the hallways and people had friends of all different backgrounds, but there were jokes and statements and incidents that proved that we weren’t at all past the race issue. And I don’t even necessarily hold that against my former classmates. People have unrealistic expectations when it comes to racism and prejudice. The 70s really weren’t that long ago. You can’t expect people whose parents grew up in some of the most tumultuous times and saw things they can’t forget to abruptly embrace new ideas because it’s the “woke” thing to do. And it goes both ways. I took my grandparents to a restaurant in Southie, a neighborhood that was dangerous for black people to go to 20 years ago, and at the beginning they were visibly uncomfortable. I think that people have a responsibility to challenge themselves and be the best people they can, but these things don’t happen on large scales overnight. I also think that progressives have a bad habit of thinking they can shame people out of bigotry. It doesn’t work like that; all you do is make them hide it.

At my school, I think the people that thought about race the least were those on diverse sports teams. And teams really are a family. They didn’t just practice together or play together; whether they were studying or partying, they were always together. A few months after I graduated, I accidentally ended up throwing one of the best parties of the summer. Everyone was there. And a fight broke out between the hockey team and basketball team – and not because of what you’re thinking. It wasn’t because hockey is “white” and basketball is “black,” it was because a basketball player was sleeping with a hockey player’s girlfriend. People were fighting and defending one another based on what team they were on, and nothing else. And in a weird way, I think that goes to show just how powerful sports can be in bringing people together.

I understand that athletes are just as entitled as the rest of us to make their voices heard and use their platforms. And I understand that statements have more power when they’re done on the field as opposed to in interviews. But considering I can’t buy a bag of Cheetos anymore without politics somehow being brought up, I wish that sports could be the one aspect of modern life left untouched by hot button issues.

Tom Brady played one of the best games of his career yesterday, but instead of salivating at this god among mortals we’re having an asinine, directionless debate about kneeling and the flag. I personally doubt that kneeling during the national anthem is going to do anything to solve police brutality. I doubt that anybody wants to think about politics when they tune into a sports game. Make sports great again, and stop dragging your political agenda into games.