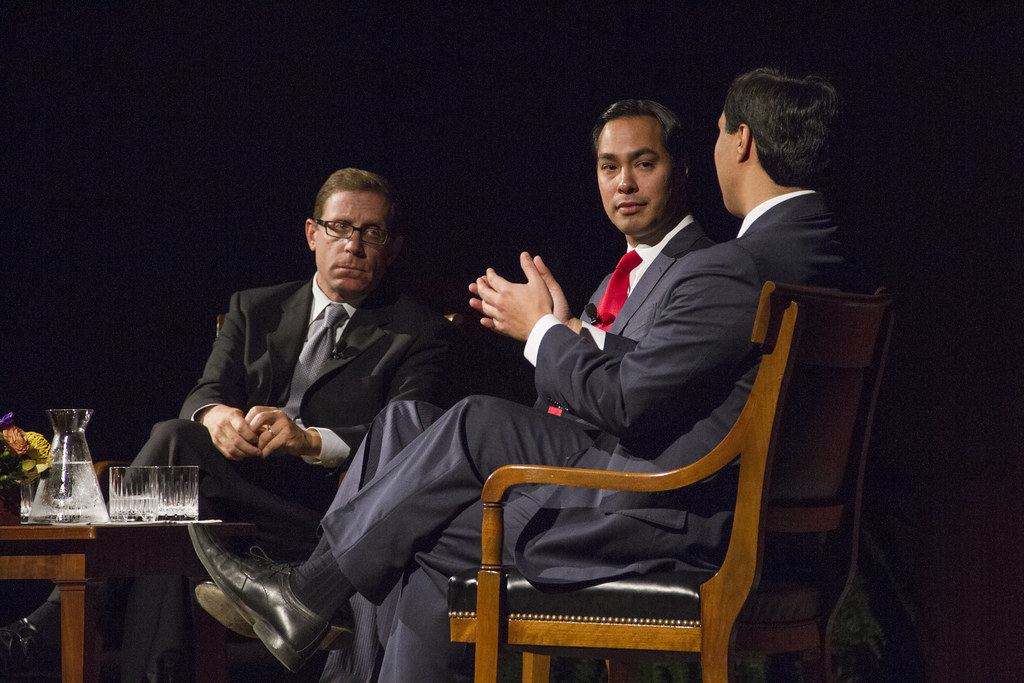 This week, a sitting U.S. Congressman tweeted out a list of President Trump’s maximum contribution donors in his district. Days after two mass shootings — one by a socialist, and one by a white supremacist. And weeks after an ICE Detention Center was attacked by someone who identified themselves as Left Wing antifa, echoing the popular “concentration camps” hyperbole and leaving behind a manifesto. I’ll pretend not to know why the ICE terrorist received so little coverage for brevity’s sake, and move on.

Sad to see so many San Antonians as 2019 maximum donors to Donald Trump — the owner of ⁦@BillMillerBarBQ⁩, owner of the ⁦@HistoricPearl, realtor Phyllis Browning, etc⁩.

Their contributions are fueling a campaign of hate that labels Hispanic immigrants as ‘invaders.’ pic.twitter.com/YT85IBF19u

Following a weekend of violence — some with clearly documented political motivations — an elected official thought it was a good idea to tweet out a list of the President’s maximum contribution donors with their full names and employers.

Sure, $2,700 would be a lot of money to me and almost anyone at this given moment. To have that kind of money laying around for political contributions implies a certain threshold of wealth. These people probably live in beautiful houses — especially factoring in the cost of living in Texas. They probably vacation more than the average American. They might have nicer than average cars or handbags. There’s an oil exec on the list and a chain restaurant owner — but most of them probably aren’t billionaires. Many of them probably aren’t even millionaires. And releasing a list of people that gave $2,700 is not the same as releasing a list of people that gave tens and hundreds of thousands through other means.

If my parents wanted to, they could probably throw $2,700 towards the political candidate of their choosing. But knowing my parents they’d much rather spend that on a new home modification or a tropical getaway. But if they had decided to spend their money on a candidate instead of a new sink, and a sitting member of Congress had tweeted out their information in the way that Joaquin Castro had, I would be turning DC upside down.

Because like the people on Joaquin Castro’s list, they’re everyday Americans that worked for their money — and have the same right as the rest of us to participate in the political process with time or cash.

Yes, political contributions are public records. But you’re intellectually bankrupt if you think a database of thousands updated every year for every candidate that no normal person checks somehow makes it okay for a sitting legislator to tweet out a list of political opponents in his own district accompanied by their employers.

But adults, with brains, and degrees, and GIGANTIC platforms are pretending not to understand the difference. 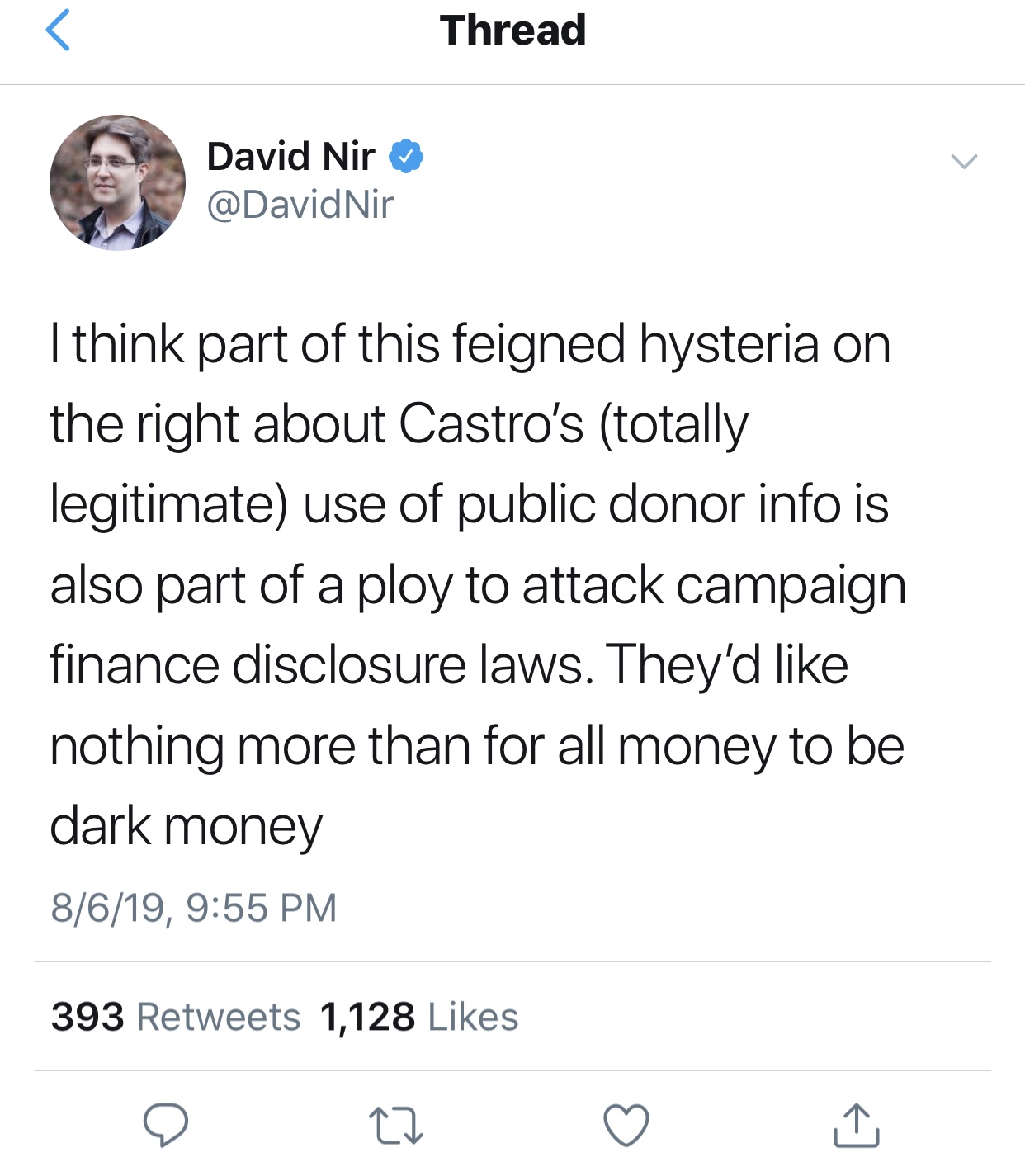 Right. Because the owner of a BBQ joint is 100% working in lockstep with Koch brothers, who don’t even like Trump, to subvert campaign finance laws. Democracy dies in darkness. 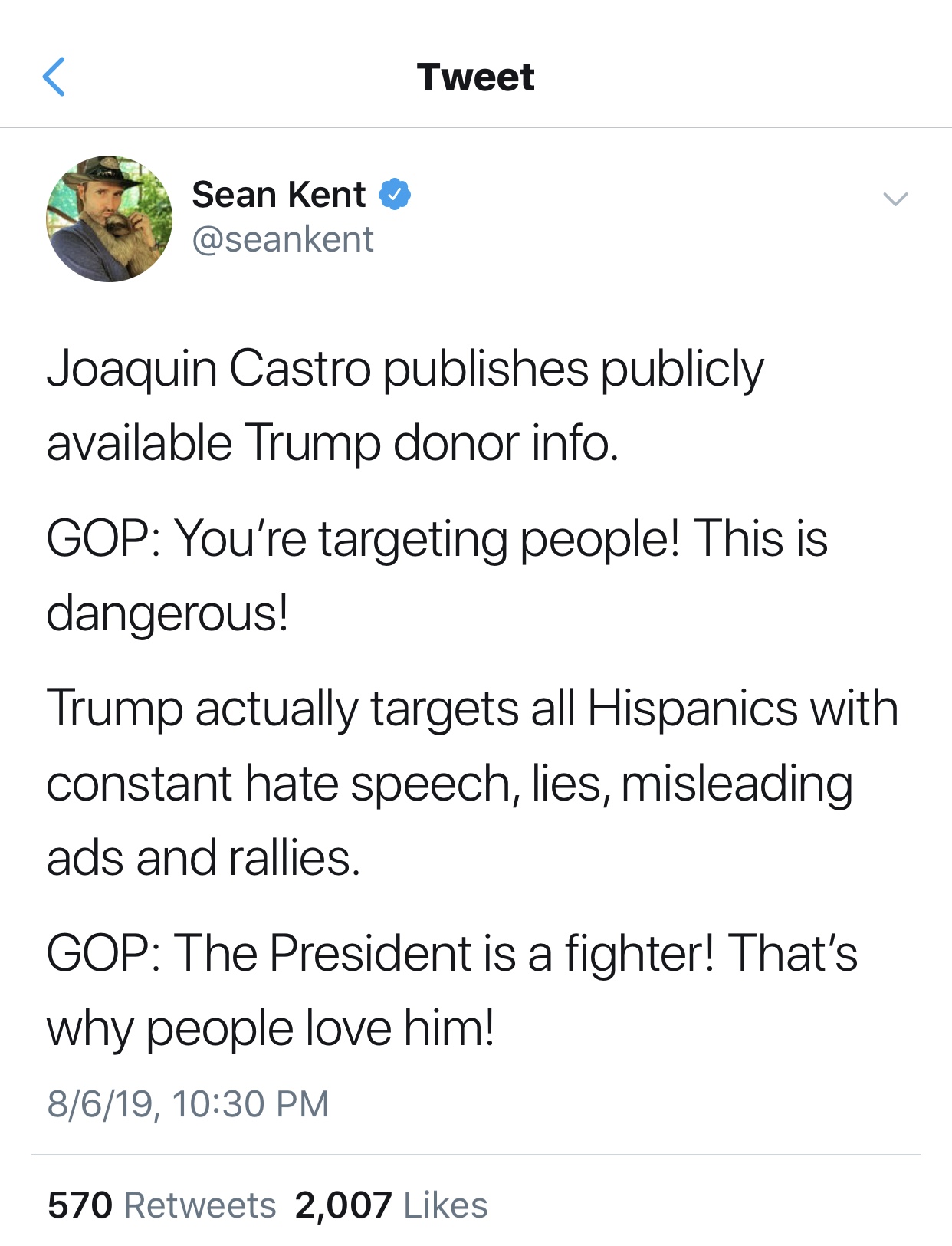 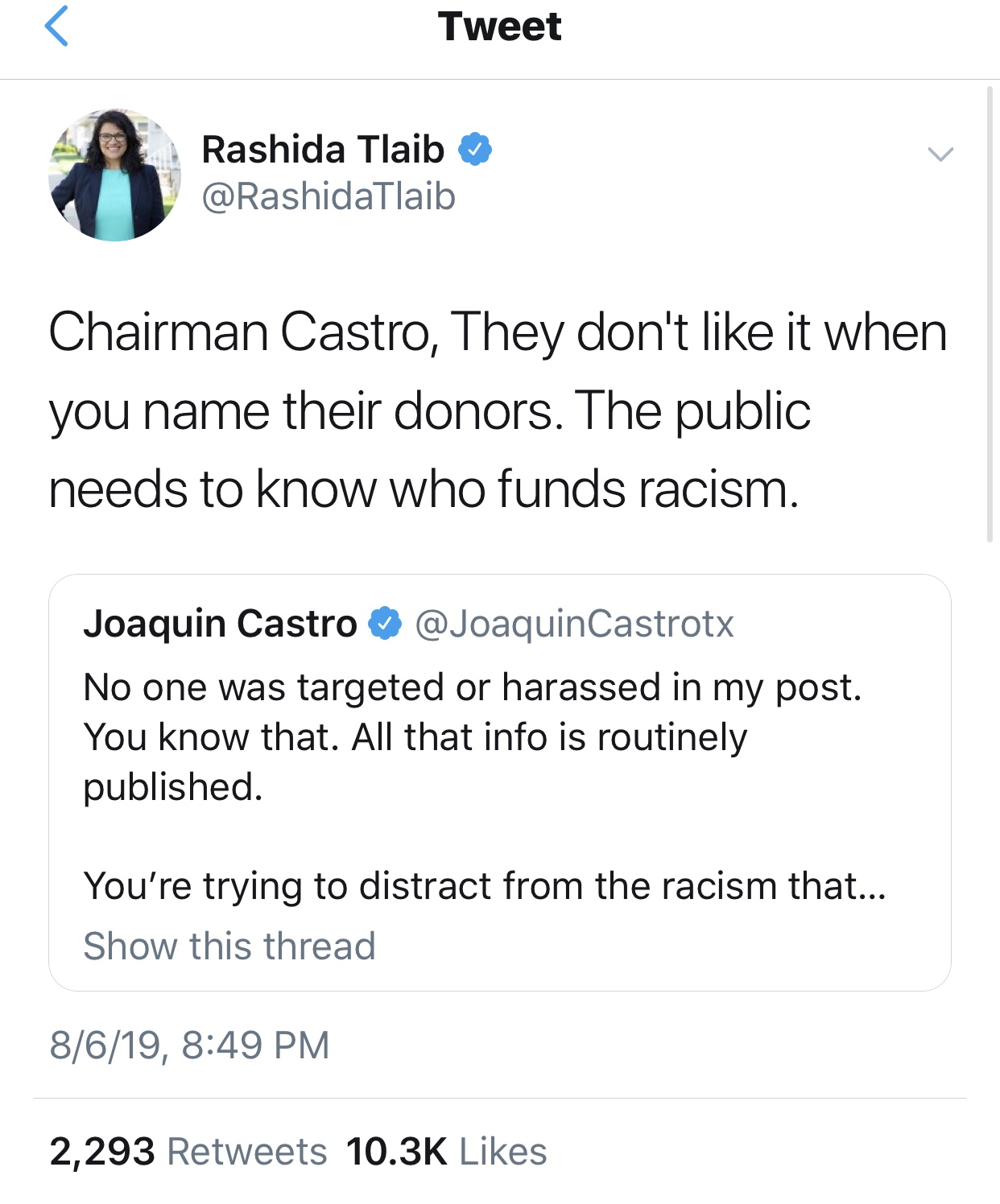 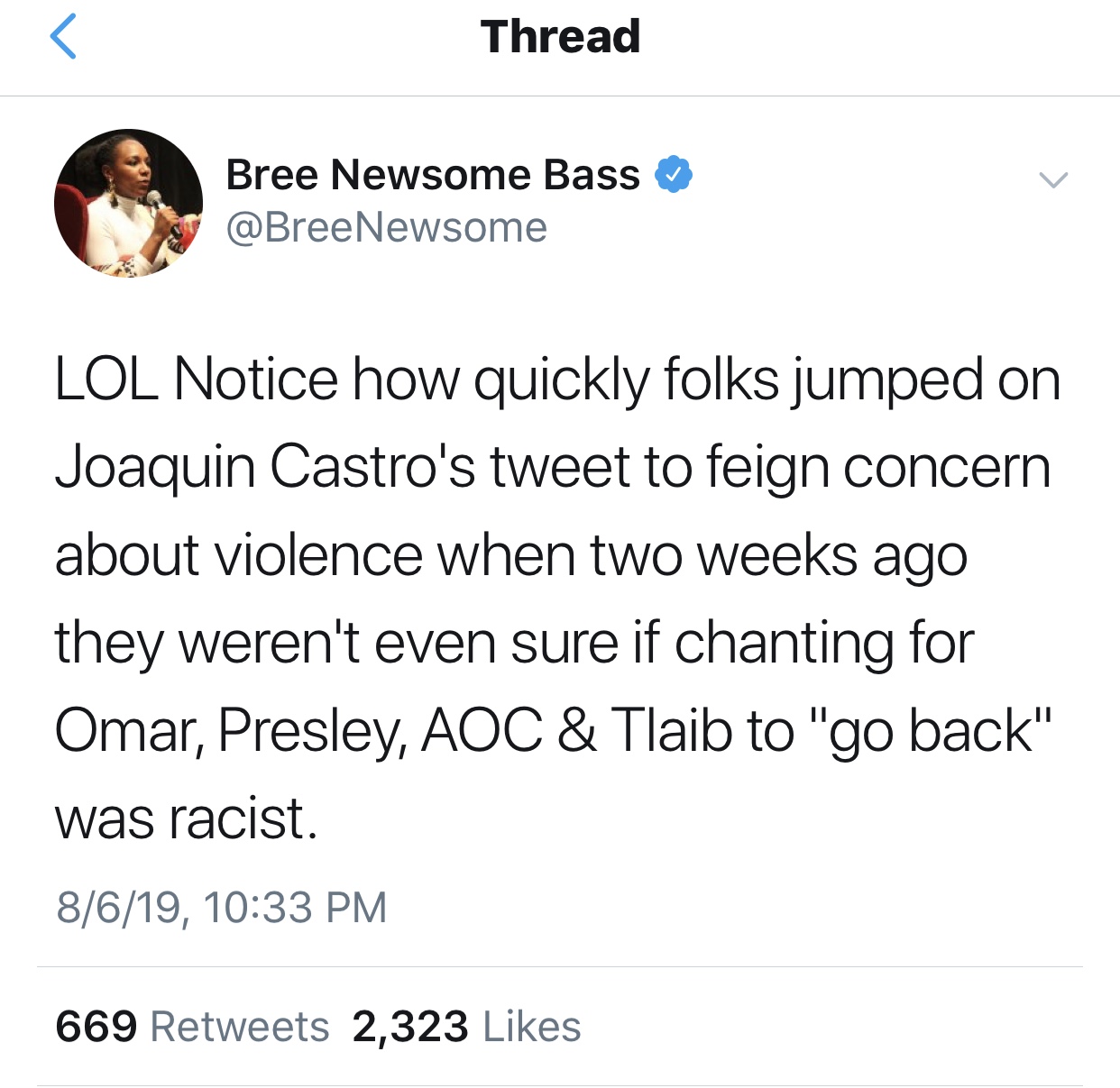 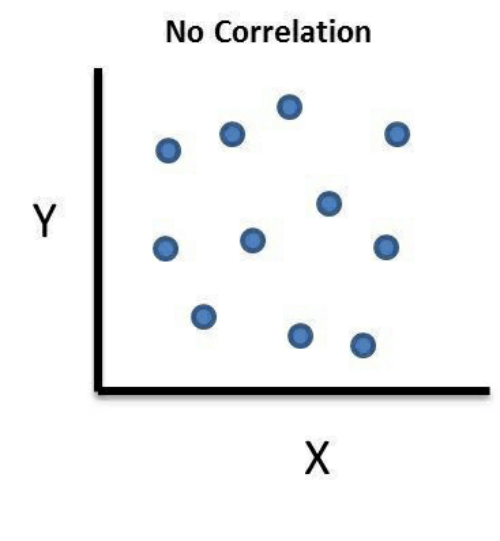 What does a rally chant have to do with a published list of private citizens and their places of work? If you find out lmk.

Ahh, a parade of political hypocrisy would be incomplete without the one and only Joy Ann Reid. Yes, a published article on the Clinton Foundation, featuring billionaires and foreign officials, published in 2008, after Obama was elected President and long after Hillary lost the nomination, is completely the same thing. It’s entirely irrelevant that political violence has been historically high for the United States leading up to and following the 2016 election. Right wing conspiracy theories — amirite?!

Clearly more of the rhetoric we need! Bravo! What bias?!

If you can label half of the country — many of whom voted for Obama in 2008 and even 2012 — as Klansmen and Nazis, detention centers “concentration camps” but think Trump is to blame for radicalization or the rise of the fringe, you are not stable or genius.

The takes have been sizzling, and so, so willfully incoherent.

You mean to tell me that saying we should build a wall and deport people here illegally is “inciting violence.” But publishing a list of your own constituents and their employers because they donated to the President in the wake of weeks of politically motivated violence isn’t?

Luckily, a few of the people that were on the list have spoken out, and they’re brushing it off. Ironically enough, he ousted one of his own donors. What Castro did — with his platform, his position, and in this climate — was dangerous. There’s no way around it. And I find it hard to believe any of the clowns I cited above would have the same energy for a Republican Congressman doing the same. They say that conservatives promote hate and division while they’ve all embraced Olympic level mental gymnastics to justify an elected official blasting their own constituents for political purposes.