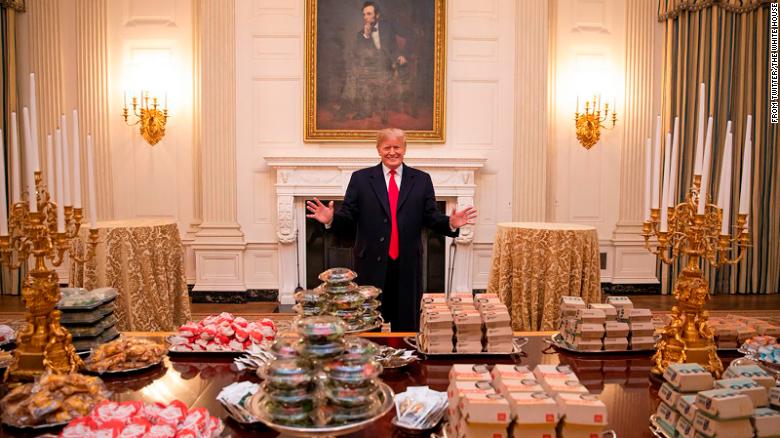 I’m oddly passionate about McDonalds, and other businesses that I feel like do an amazing job of being inexpensive but efficient. I was actually going back and forth on doing a blog post on this for a while because I’m sure the last thing anyone wants to read about is how much I love McDonald’s — but then King Trump served the Clemson Tigers a buffet of “Great American Food” consisting of McDonalds, Wendy’s, and Dominos and I just knew that I had to speak on it, no matter how many people read this and then regret the 2 minutes of their lives they just wasted and can never get back.

We all know a person that brags about how much fast food they don’t eat, or asks if you “know what’s in that” every time you eat a hot dog. And they’re the worst. Like, the actual scum of society. The only people that might be lower than them on the societal totem pole are pedophiles and people that wear glasses for “fashion.”

Everyone under the age of like…28 was forced to watch Super Size Me in a health class at some point, and we all know that consistently eating McDonalds — or any fast food — isn’t good for you. But let’s be honest — neither are the kale chips or “veggie sticks” or frozen “cauliflower pizza” or other health gimmick BS that are flooding Instagram at any given time.

But if you were to put McDonalds on a food truck at some pretentious $50 entry beer festival and pretend it was grass fed and founded by a queer refugee, the same people that never shut up about how terrible fast food is wouldn’t be able to get enough of it. ESPECIALLY if we’re talking about their signature burger collection.

Because McDonald’s — and fast food in general — tastes amazing. Of course, there’s a direct correlation between how drunk/hungover you are and how good it tastes — but the point still stands.

And I’ve had enough of the people that pretend to hate everything accessible or inexpensive or popular for the appearance of prestige or sophistication.

It’s not just McDonalds or fast food. It’s the people that take pride in not knowing Top 40s. It’s the self proclaimed “fashion icons” that act like shopping at TJ Maxx or Forever 21 is the eighth deadliest sin. It’s the obnoxious tryhards that pretend there’s anything enjoyable about small plates with more sauce decoration and garnishes than actual food. Or that 90% of jazz doesn’t just sound like a man holding 4 instruments falling down a flight of stairs.

Big Macs are great. Thank u, next is a bop if there ever was one. Forever 21 makes amazing clothes — and let’s just lay everything out on the table: if you have to spend hundreds and thousands of dollars to put together a nice outfit, you can’t dress. And you’re a pathological liar if you’re telling me you’d rather spend $35 on a tuna tartare that takes up 1/12 of the plate it’s on than eat $5 box of frozen quiches from Costco.

Yes, I like treating myself as much as the next over-indulged millennial, and I have plenty of pretentious preferences myself. But hating on popular things for the hell of it doesn’t make you cultured or unique, it makes you insufferable and corny.