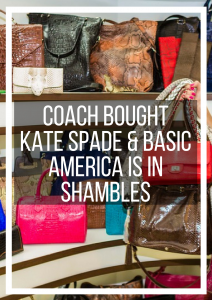 Yesterday, news broke that disgraced luxury brand Coach will acquire Kate Spade for $2.4 billion, and basic America lost it. For those of you that are clueless about the hierarchy of luxury accessory brands, Kate Spade isn’t that expensive in the grand scheme of things. They also constantly have sales discounting their products at huge percentages, and they’ve become “old news” to an extent. But despite all that and declines in profits, they’ve consistently maintained a certain status among middle class Americans. The status that they’ve maintained is much more important than one might think.

Though Coach still remains in those pretty, shiny luxury malls next to stores like Salvatore Ferragamo and Jimmy Choo it’s at the bottom of the barrel when it comes to “luxury” and brand recognition. Coach was Michael Kors before Michael Kors was Michael Kors. They oversaturated their line with cheap items printed in their logo and made a series of other mistakes and despite their efforts, they’ve never fully recovered.

To put thing in terms that male readers could understand, if you bought your girlfriend a Kate Spade bag she would either likely hug you and say thank you or get genuinely excited and be mentally preparing for a world class beej. If you got your girlfriend a Coach bag, she would probably force a smile and ask if you kept the receipt.

Needless to say, Kate Spade’s customers are none too happy about the fact that their beloved go to is being bought out by a brand none of them have been caught dead in since 7th grade.

Coach bought Kate Spade & this is my worst NIGHTMARE

Coach buying Kate Spade to me is like Kay Jewelers buying Tiffany&Co. tbh

I see Coach is buying the Kate Spade empire. They just should buy out Ugg too and cater the whole basic bitch package.

If I called myself “royal” anything and had a “Let Me Speak to the Manager” haircut I wouldn’t exactly be throwing stones.

SEE YOU IN COURT, THE SECURITY OF OUR NATION IS AT STAKE! https://t.co/uVu6tk0gkL

I studied fashion for my first year and a half in college, and to be honest this acquisition will probably have little to no effect on Kate Spade’s products. And if that is true, you can keep buying your girlfriend flamingo and watermelon purses and expecting sexual rewards. God speed.

Life Lessons from The Office »