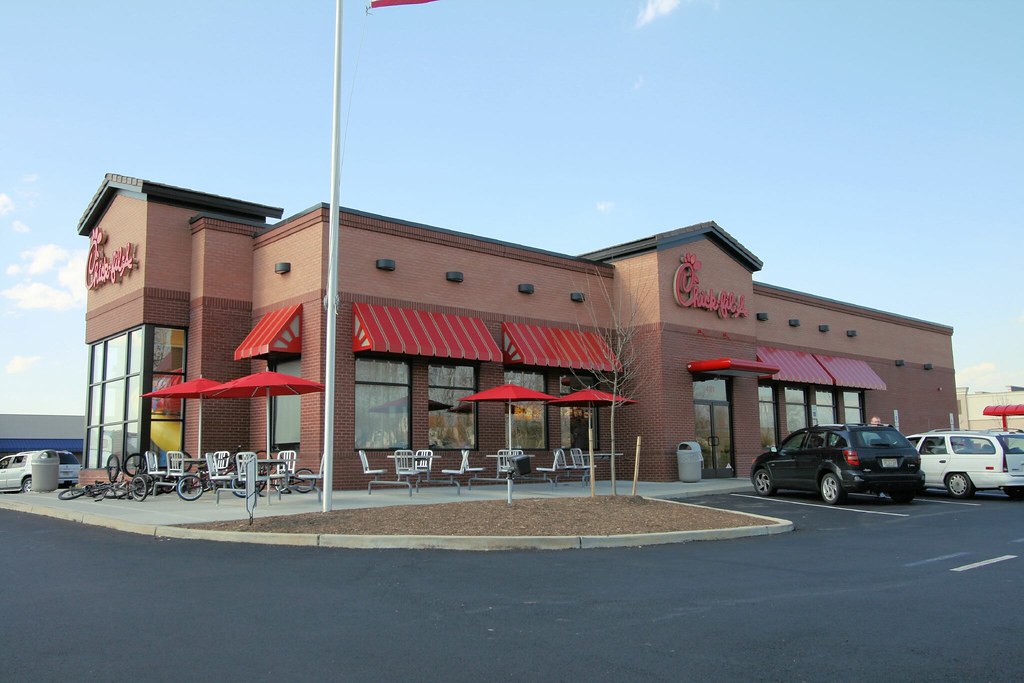 I was scrolling through Twitter one morning when I came across this article from the Toronto Star. 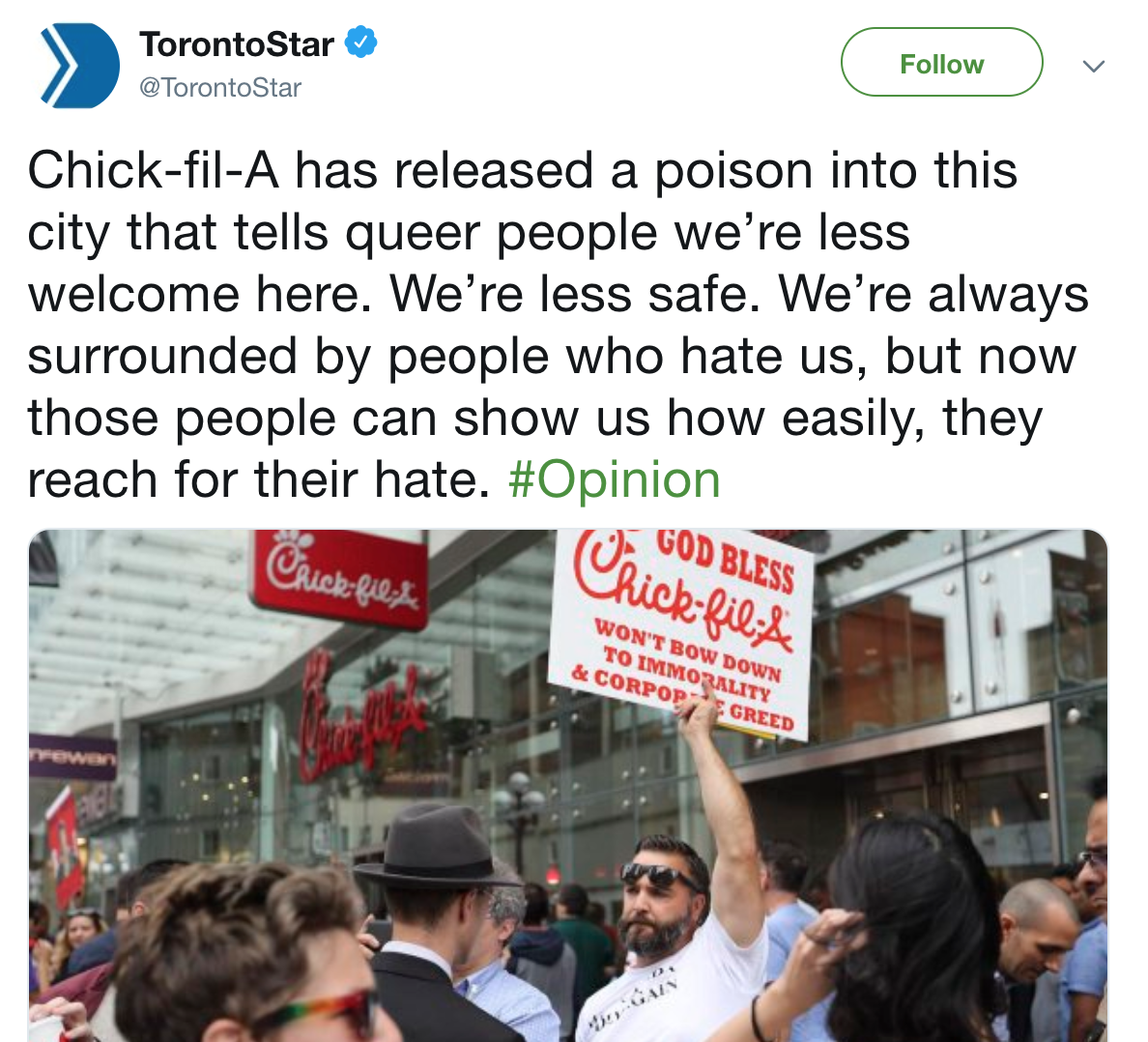 My instinct was to immediately jump to conclusions and judgment based on the two sentences I’d read, but I decided against that. I actually clicked on the article and read the whole thing with as open of a mind as possible before forming any opinions.

Because the longer I work in politics, and the longer I’m involved in this world, the more I grow, and I’ve learned that almost nothing in life is as black or white — or red or blue — as the talking heads and reactionaries make it out to be.

Sure, I love Chick-fil-A as much as the next person, and I’ll eat there as long as there’s one across the street from my job and around the corner from my apartment. They make an affordable, convenient high quality product and are nationally recognized for their customer service. They run like a well oiled machine, and a less-than-satisfactory experience at one of their establishments is an exception, not a rule — which is something to be said for a fast food chain.

And they’re owned by Christians that have made their opposition to same sex marriage clear both in public statements and sizable donations. I’ve been very clear about my support for both the LGBT community and religious freedom. I think that gay people should be allowed to be gay in peace, and Christians should be allowed to be Christian in peace. To me, that means gay people should be able to get married, and that Christians should be able to abide by their faiths and decline participating a ceremony at odds with their beliefs.

But the Family Research Center — the most controversial organization that Chick-fil-A donated to — didn’t just support a biblical definition of marriage. It portrayed homosexuality in and of itself as a danger to society.

So I try to put myself in the shoes of a gay person. What would it be like to find out that one of my favorite fast food chains donated to white nationalist causes? What if a quarter of every pan pizza I ordered from Dominos was going into a neo nazi hate group? And how would I feel if the people around me continued to buy from them?

So I opened the article, doing my best to empathize and see things from a different perspective.

“This past weekend I saw something that made me unexpectedly queasy; a young woman slurping soda out of a fast food cup. It upset me because it was a Chick-fil-A cup.”

I’m a writer, I get it, sometimes you need a dramatic lead…but damn. I don’t think anyone’s gut reaction to a bag or a cup or a box from a fast food chain should be political — even if you don’t like who they donate to. It says a lot about where your head’s at, and that it might not be in the best place. I kept reading.

“We know that moral purity is impossible in a capitalist society. Every week, you’re spending money in ways that harm the environment, spread political strife, and empower the greedy and corrupt. We all make difficult choices…This one isn’t difficult. I will not support a company that is ideologically opposed to my existence, and that uses the money spent there to campaign against my existence.”

I mean, I want to say the author has a point here. I use Adobe products for work and recreationally. I’ve bought candles at Bath & Body Works. I used Craigslist to find my current apartment. One of the two pairs of athletic shoes I own are Nike. And I’m going to use GroupOn to book a Brazilian in a couple of weeks.

Every last one of those companies donate to Planned Parenthood — an organization that I am diametrically and fundamentally opposed to. And sure, if I can avoid giving my money to businesses that are going to turn around and spend it on causes I don’t believe in, I will. I remember one time my friend and I wanted ice cream and we passed a Ben & Jerry’s and I said “can we go somewhere less liberal?” But we were having a day, and in downtown Boston, and had all the time to kill in the world. If that weren’t the case, it wouldn’t have been the end of the world if I had to buy one cone from dirty commies.

This is where I take the most issue with the article, and where I lose any ability whatsoever to identify common ground between the author and I.

Have you ever known someone that made everything about them? They see your Instagram story and immediately assume you’re taking a subliminal shot at them, when in reality you’re actually just rewatching Gossip Girl and getting pissed off at Serena all over again? Or you’re going through something, and it’s somehow turned into their soapbox? Or that one person writing a literal thesis under a meme on Twitter because they took a joke extremely personally? And you just want to scream from the rooftops “THIS ISN’T ABOUT YOU, GRETCHEN!”

That’s the same kind of oblivious self involvement the author exhibits. When I pick up chicken minis for breakfast or decide to get a spicy deluxe for lunch, it’s not because I’m thinking “fuck the gays” or “I don’t care about gay people or their issues.” It’s because I’m hungry, Chick-fil-A is in walking distance, it tastes fucking good, and I’m a busy person that doesn’t have the time or energy to turn every purchase into a political statement.

If you refuse to buy any product that could directly or inadvertently contradict your belief system, good for you. But most people aren’t thinking about social issues or activism when they’re on their lunch break, and most people don’t have time to go through a company’s tax returns before making a purchase. People are people, chicken is chicken, and if you keep your head out of your own ass for a long enough period of time, you realize that the world doesn’t revolve around the way you see it.

« For The Love of Lilly

I Finally Get What “Progress Not Perfection” Actually Means »